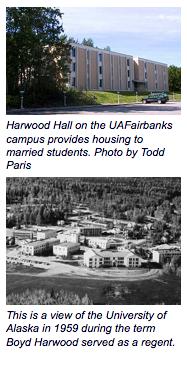 Boyd C. Harwood was born in Chatfield, Minn., on January 1, 1903. He attended school in St. John, Wash., and graduated with a degree in pharmacy from Washington State College, Pullman in 1925. For several years he worked as a pharmacist until he came to Alaska in 1942. In 1946, Boyd moved to Nome where he bought and operated the Nome Drug Store.

Active in Alaska politics he was elected to the board of directors of the Miners & Merchants bank in 1957; elected president and chairman of the board of the bank in 1960; he served as a member of the UA Board of Regents from 1959-1964.

Mr. Harwood suffered a heart attack on January 10, 1964 and died at Maynard McDougal Hospital in Nome on Jan. 28.

Harwood Hall was named in honor of him and his service to the university later that year.

Board of Regents Files. University of Alaska Statewide.