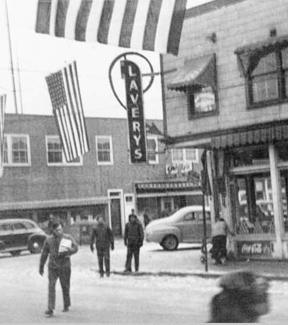 Robert Lavery was born in New York in 1860 to Helen and William Lavery. Robert arrived in Dawson in 1897, where he mined and worked as an accountant for the Palmer Brothers store. He once worked in Hawaii as a supervisor of a sugar plantation.

In 1904 in Dawson, he married Marshia Latimer and in the spring of 1905 came to Fairbanks. They open a grocery and general merchandise store, known as Lavery’s House of Quality at the corner of Second Avenue and Cushman Street.

Lavery, a Republican, was appointed to the board of trustees of the Alaska Agricultural College and School of Mines by Governor Scott Bone in 1921, to complete the unexpired term of Dr. L.S. Keller of Skagway. Lavery was nominated on the recommendation of Judge James Wickersham, to gather a republican majority on the board to oust Democrat Charles Bunnell from the Presidency. The political maneuver was not successful however and Lavery left the board four years later. Ralph E. Robertson was appointed to take his place on the board. Lavery also served on the city council and as a national committeeman for the Republican Party.  He is also one of the founders of the Pioneer Airplane Corporation, which financed Ben Eielson on his first airmail trip to McGrath in 1923.

Lavery died on July 5, 1931 in Seattle, Washington. At the time of his death, he was a director in the First National Bank of Fairbanks. The News-Miner said he was a “noble pioneer,” who was misunderstood by many people because he was outspoken and would fight for his convictions.

The Laverys had four children: Robert, William and James and one daughter Helen Lucille, who married Lawrence William Meath of Fairbanks on June 18, 1938. His son Bill Lavery started Lavery Airways when he was 20 years old. Bill and his wife Sylvia operated the Airways for many years out of Fairbanks and later offered the first scheduled flights to Anchorage. Bill received the Order of Lenin for his part in a rescue off the Alaska coast of Russian settlers who survived after the Chukchi Sea ice crushed their ship.

With the money the Soviet Union awarded him for his heroism, Lavery bought a movie camera, reportedly the first in Fiarbanks, with which he shot scenes in life in Interior Alaska.