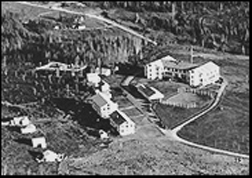 During the beginning of the 21st Century, the expansion of human knowledge was extending not just from the crust of our planet but above and below Earth's surface.

Explorer Richard Byrd flew to the South Pole and renowned scientist Edwin Hubble first suggested that the universe is expanding. The U.S. Coast and Geodetic Survey began installing seismographs at multiple colleges, including the University of Alaska. Scientists around the world begin to question the relationships among Earth's magnetic field, the ionosphere, the aurora, and radio wave propagation.

Merle Tuve at the Carnegie Institute initiated experiments proving the ionosphere exists and Carl Stormer's work in Norway revealed that the aurora occurs within the same height region as the ionosphere. The key to the discovery of the ionosphere, a portion of the high atmosphere (40 miles or 64 km and above), was its ability to both support electrical currents and to affect the propagation or conduction of radio waves. The era of radio broadcasting was born from this research, eliminating the need for string telegraph wires underneath oceans and across continents.

Scientists began to realize that the ionosphere at high latitudes was not always reliable for broadcasting and differed radically from the more equatorial regions. Merle Tuve, from the Carnegie Institute at the Department of Terrestrial Magnetism "DTM," discovered that the ionosphere became disturbed during magnetic storms, suggesting a relationship between the aurora and the ionosphere. At the same time, Norwegian scientist Carl Stormer was close to discovering that the height of the aurora occurs in the same region of the ionosphere.

Charles Bunnell, the president of the Alaska Agricultural College and School of Mines, recognized that Alaska's unique geographical location could allow his institution to be a part of new cutting edge research into the ionosphere. Despite the tragic US stock market crash of 1929, Bunnell established funding for geophysics research in Alaska. He secured a grant of $10,000 from the Rockefeller Foundation for Auroral Height Measurements with Tuve's boss, John A. Fleming DTM director at the Carnegie Institute. Thus, the research of Arctic geophysics in Alaska was born. 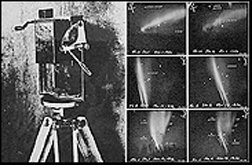 From 1930-1934, Professor Veryl Fuller, the one faculty member of the Alaska Agricultural College and School of Mines physics department, initiated the first auroral studies using two special cameras (similar to the one in the third photo), which could take six pictures in rapid succession. The acquisition and triangulation of thousands of synchronized photographs taken from College Hill and 11-mile Richardson trail provided a foundation for the discovery that the aurora generally occurs about 62 miles (100 km) above the surface of the earth. Ervin Bramhall completed Fuller's research after his death in 1935. Their discoveries were reported in "Auroral Research of the University of Alaska," the first publication of Alaska Arctic Geophysics.

Although early studies were mostly small and isolated, the college participated in a coordinated worldwide network for geophysical measurements during the International Polar Year "IPY" (1932-1933). The purpose of the IPY was to obtain simultaneous measurements over large portions of Earth to learn more about how the ionosphere and the geomagnetic and geoelectric fields behaved at the Auroral Zone. 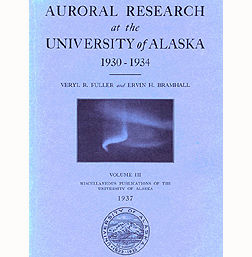