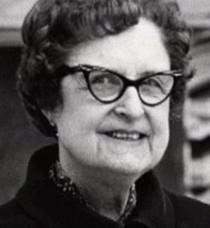 Edith Rose Bullock, “Tugboat Queen of the Arctic,” was born on April 11, 1903, in Red Lodge, Mont. and raised in Washington’s Yakima Valley and educated at the University of Washington, majoring in Business Administration. She came to Alaska in 1939, and settled in Nome where she lived with an aunt and uncle. The following year, she married John L. Bullock, a gold mining dredge master in Nome.

Edith’s first Alaska job was as a bookkeeper for Lee Brothers’ Dredging Company operating thirty miles outside of Nome. Next, she was employed by the Miners and Merchants Bank of Nome, first as a stenographer, then as a teller. In later years, she became a member of the bank’s board of directors.

From 1945 to 1948, Bullock and her husband worked in freighting and mining in Northwest Alaska, and in 1948 they moved to Kotzebue. In 1951, they started the B & R Tug and Barge Service with Louis Rotman, and they also acquired the Standard Oil distributorship.

From 1953 to 1959, Bullock served two terms in the territorial House of Representatives and served in the last session of the territorial Senate. She was the first woman to serve on the board of directors of the Alaska State Chamber of Commerce and was honored by that organization as “Outstanding Alaskan” of 1967. She has been similarly honored by the Alaska Press Club.

When a fire destroyed their home in 1958, the news report referred it to as “the palatial residence of the Jack and Edith Bullock.” When the Bullocks divided their business interests, he going to Vancouver, B.C. to start his own barge operation, Edith became president and sole owner of the B&R Tug and Barge Company. The Bullocks divorced in 1966 and in 1969 she moved to Anchorage.

In 1969 she merged her operation with two other freighting firms as part of a Seattle-based consortium. She became a director, known as PAC, which is the registered trade name for the Pacific Inland Navigation Co., Inc.

She was appointed to the University of Alaska’s Board of Regents in 1967 succeeded Ruth McLean. She served until 1975. During her last two years on the board she was its vice president. By resolution at the time of her retirement, her fellow regents recognized her “able leadership” and “conscientious diligence in the pursuit of her duties.” Sam Kito Jr. was appointed to take her place on the Board.

Mrs. Bullock has received an honorary Doctor of Public Service degree by the University of Alaska in 1976. In 1979 she was honored as Alaska of the Year, and was the first woman to win that recognition.

She died at her home in Anchorage on May 8, 1994. Dr. Jerome Komisar, then president of the University of Alaska, lamented her passing, calling her the university’s strong and faithful friend: “She loved Alaska and she loved the university, and both are vastly enriched because she cared so much.”

In 1995 Mrs. Bullock left the Foundation a gift valued in excess of $1.3 million and which included her residence in the Peterson Towers on L Street in Anchorage. The Trustees agreed to use a portion of the gift to endow the Edith R. Bullock Prize of Excellence.

Edith Bullock is also mentioned in this article

Board of Regent Resolution of Appreciation