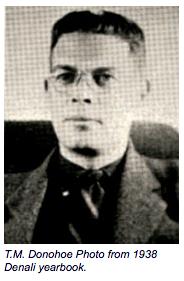 This article was reprinted from the Dec. 1, 1947 Farthest North Collegian.

Thomas Miller Donahoe, youngest member of the Board of Regents of the University of Alaska, died Sunday, November 2, while passing through Roseburg, Oregon. He was enroute to his mother's home at Atherton, Calif,, near Menlo Park.

Mr. Donahoe was born in Juneau in 1903. His family moved to Valdez when he was an infant. His father, Thomas Joseph Donahoe, was a prominent attorney in the Third Judicial Division, with headquarters in Valdez. Associated with him in the practice of law was John Y. Ostrander and, in the course of time, Joseph H. Murry and Anthony Dimond.

The younger Donahoe attended public school in Valdez and later entered Stanford University. He graduated from Stanford in 1921 with degrees in political science and law. He was married in 1922 and returned to Alaska to engage in the practice of law with his father at Valdez and Cordova.

Later, after both members of the firm of Ostrander and Donahoe had died, he moved to Anchorage and opened a law office. At this time, his father's partner, Mr. Dimond, was appointed district judge for the Third Judicial Division, with headquarters in Anchorage.

Mr. Donahoe was appointed to the Board of Regents on May 3, 1937, to fill the unexpired term of Mr. Martin Harrais and in 1941 was reappointed for a term of eight years. Faithful to his duties as a member of the Board of Regents, Mr. Donahoe always made a special effort to be in attendance at meetings of the board. His services were invaluable as an attorney and a successful business man. His passing is a great loss to the institution.

Robert, one of the three sons who survive him, enrolled at the University of Alaska in the fall of 1942 and finished both semesters of that academic year. Neither Robert nor Thomas, his other two sons, attended the university.

William A. O'Neill was appointed to take his place on the board.