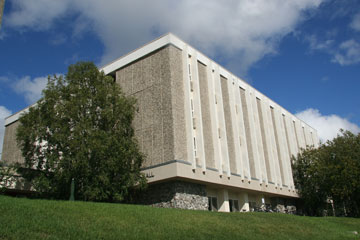 Ivar Skarland Hall opened in 1964 as the "new women's dorm," to accommodate 142 students in double and single rooms. Dedicated on May 7, 1966, the residence hall is part of the Moore-Bartlett-Skarland complex located on Rainey Ridge. The hall was converted to coed in 1975 and subsequently was designated coed by floor. In 2009 the university administration determined that there are enough problems with the building that it should not be used for student housing until funding can be found to correct them. In August 2010, renovations to repair Skarland Hall began. Renovations are scheduled to be complete by fall 2011 and the hall will be used as an EDGE residence.