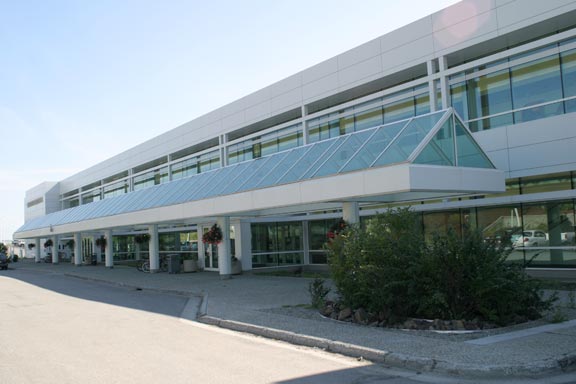 The 93,000-square-foot, three-story building, located on the southern edge of West Ridge, overlooks the university's agricultural farmland, part of the original land grant from the
U.S. Congress in 1915.

The John Butrovich Building’s cost was estimated at approximately $16 million, part of which was allocated by the state Legislature in 1984. The top floor of the building opened in 1988 to house the University of Alaska Statewide offices, including the offices of the president, vice presidents, board of regents and other services. However, due to the use of faulty materials, the building’s half-built portion was already deteriorating.

In 1992, $5 million was appropriated by the legislature to complete the bottom floor of the building, which was assigned to house a new supercomputing center.

The Butrovich Building was repaired and finished in 1995. It now houses the statewide administration, the Statewide Information Technology Services and the computers and some staff for the Arctic Region Supercomputing Center. Additional staff members for ARSC are housed in the West Ridge Research Building.

Since the installation of the first supercomputer, nicknamed Denali, in 1993, ARSC has grown from one supercomputer to a state-of-the-art high performance computing facility housing three supercomputers as well as storage and visualization resources.

The supercomputers manage incredibly large volumes of data generated by ARSC users, primarily academic and government scientists. ARSC's interpretive viewing area on the ground floor is open to the public at no charge Monday through Friday, 8 a.m. to 5 p.m.

History of the Butrovich Building

John Butrovich is also mentioned in this article: