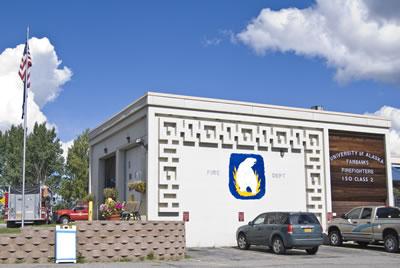 The Whitaker Building, formerly known as the Health, Safety and Security Building, was built in 1973, bringing all UAF emergency services under one roof. The part of the building that is the Fire Station, however, was built in 1964. The building was officially dedicated to Willard "Buck" Whitaker on May 19, 2001. Whitaker served as the university's first paid fire chief from 1967-1978.

Today, the building houses the UAF Fire Department, UAF Police Department, UAF Dispatch Center and the Center for Health and Counseling. Fire-fighting staff is predominately made up of students, many of whom are working towards an associate’s degree in emergency services or a bachelor’s degree in technology.

The University Fire Department serves a 25-square-mile area beyond campus, including the airport. It is one of the largest fire service areas in Alaska’s Interior and one of only a few fire departments in the country run by a university.

The UAF Police Department has a staff of fully commissioned police officers trained through the state police academy. The department also hires student Public Safety Officers, and there is a police dog on the force.

In 1973, when the building opened, students, alumni and local residents raised funds for a new, state-of-the-art ambulance known as "Uncle Able," which was retired in the 1980s. Students also funded Fairbanks’ first ladder truck in the early 1970s, demonstrating their concern that the new residence hall complex, Moore-Bartlett-Skarland, was too tall to be adequately served by the existing fire vehicles in Fairbanks. Their campaign raised $120,000, enough to buy the truck.

Firefighting has a long history at the university. The first formal student volunteer force was formed in the 1950s in response to concerns that Old Main, which was 40 years old, might catch fire and ignite the entire campus. The force was directed by mining Professor John Hoskins and had use of a jeep pumper, which was owned by the nearby community of College, and the university fire truck. Student volunteers were compensated with free accommodations at Hess Hall.