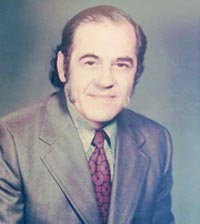 Gordon W. Hartlieb was a professor of Law at the Anchorage Community College and University of Alaska Anchorage. He was an attorney, businessman, and philanthropist within the Anchorage community. He was one of the original members of the ACC faculty and an spokesman for vocational, technical, and academic needs of Alaska. Photo: UAA. Facilities campus art inventory

*Correction: An article on Page F-1 of Wednesday's Business section about the death of Gordon Hartlieb incorrectly reported where Hartlieb received a law degree. He graduated from Ohio State University.

Longtime Alaskan and former banker Gordon Hartlieb died Jan. 27 after a long illness. He was 77.

Hartlieb leaves a financial landscape much changed since he arrived in 1953.

He founded several Anchorage businesses and was involved in banking for over 30 years.

As a banker, he wrote the charter for First Federal Savings and Loan, later renamed First Federal Bank of Alaska, and served as chairman, president and chief executive until he retired in 1988, according to his wife, Dee Moreau.

First Federal was one of many victims of the economic recession and real estate crash of the late 1980s. The bank was taken over by regulators less than a year after Hartlieb retired. It later shut down.

Hartlieb came to Alaska from Ohio, fresh out of Kent State Law School, traveling to Alaska with his then-wife Frieda in a Jeep with a trailer, Moreau said.

He was appointed U.S. commissioner for the Anchorage precinct from 1954 until he resigned in 1956, Moreau said. The job entailed being a kind of probate judge that also served as a coroner and notary public.

In the late 1950s, he became the attorney for the National Bank of Alaska, a job he retained through the early 1960s, according to Ed Rasmuson, chairman of NBA and a longtime friend.

Hartlieb served on the NBA board for over 25 years while the bank grew from around $60 million to about $2.5 billion in assets, Rasmuson said.

Hartlieb also served as director of the National Home Loan Bank of Seattle and the League of Savings and Loans, Moreau said.

Hartlieb and Rasmuson went hunting, fishing and flying together for years, Rasmuson said.

''He always had witty remarks that often held a lot of practical wisdom,'' Rasmuson said.

''He hiked all over this area in pursuit of rabbits,'' Moreau said. ''He was always disappointed when the population cycle was low.''

Another of Hartlieb's favorite hobbies was restoring vintage cars. They were a staple in the lobbies of First Federal branches, where everyone could enjoy them, Moreau said.

''He always had dirt under his nails,'' Rasmuson said. ''He was always happiest working on his cars. That was his real hobby.''

Hartlieb was a founding partner in the firm of Hartlieb, Groh & Rader, where he specialized in labor law, Moreau said.

Hartlieb served on the Anchorage City Council from 1968 to 1974.

The University of Alaska Anchorage vocational-technical building is named after Hartlieb for his contributions and 15 years as a teacher of business and mining law.

There will be a celebration of his life at 2 p.m. Saturday at the Amazing Grace Lutheran Church, 10830 Elmore Road.