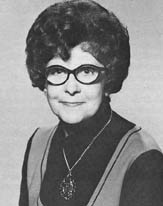 Beatrice McDonald, associate professor of office administration, was one of the original members of the faculty when the community college first opened in 1954 as a small adult evening school operating at West High School.

The citation which honors her reads in part: "Beatrice McDonald, who became the pillar of the school of business since the college was founded, and whose many students are now the competent career women of Anchorage."

Mrs. McDonald earned her Bachelor's degree at the State Teachers College in Salem, Massachusetts. She came to Alaska in 1952 and worked as a secretary for the Alaska Railroad until she joined the community college faculty in 1954. She returned to Massachusetts in 1954 to get her Master's degree at Boston University. On her return, she worked to revise the college's two-year associate in arts program in office administration and planned a one-year training program for legal secretaries in the early 1970s. For her many efforts on behalf of secretarial training programs, she was made an honorary member of the Alaska Native Secretaries Association, the only honorary member of the group in the state.