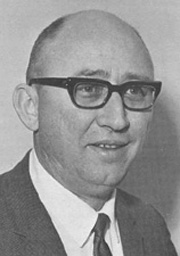 In 1963, when Clayton first served as director of the Kenai City School's fledgling adult education program, he was working as an English teacher at Kenai High School.

Clayton received a Bachelor of Arts from Montana State University at Missoula and a Master of Arts from Colorado State College at Greeley.

Brockel first came to the Territory of Alaska in 1954 and taught school in Klawock. He then taught at Ft. Greely High School. While at Ft. Greely, he first became involved in adult education as an instructor in the Alaska On-Base Schools system of military education, He also organized and coached Greely High School's first basketball team.

After Fort Greely, Clay took a teaching job in California, but his case of "Alaska Fever" caused him to seek a way to return, and in 1962 he took on the job of teaching English at Kenai High School. It was a new school system in a brand new state. The nearby Air Force Station, Wild-wood, had an active adult education program. A few months later, Clayton was organizing and expanding that program from an on-base military operation to a community-wide program open to military and civilians alike. 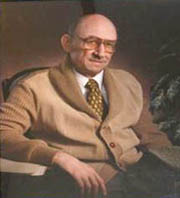 A portrait of Clayton Brockel is on display in the Brockel Building.

The director of adult education was a part-time, evening job at first. Then it became a half-time job, in 1964, just as the Kenai City Schools were absorbed by the new borough school district. Two years later, in 1966, the Board of Education approved the director as a full-time position. Brock was ready to expand the college's offerings and effectiveness.

For the first three years, the college office was Brockel's briefcase. With a full-time position, Brockel talked the Kenai Central High School into letting the college use a closet-sized office near the faculty lounge. There was enough room for a battered file cabinet, a small desk, and two chairs--one of which had to be moved in order to open a file cabinet drawer.

Clay was rarely in his office, but when he was, the door was always open. Classes were arranged, students advised, business transacted with the door open. If more than two people were involved, one of them had to be in the hallway. When asked about it, Brock always maintained it was a ventilation problem. "This isn't an office," he'd say. "It's a storage room." While saying this, he'd often project his voice down the hall toward the principal's office. 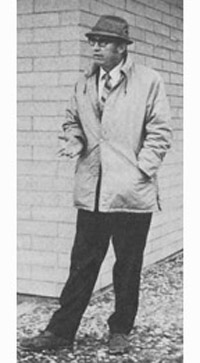 Founding Director Clayton Brockel lined up classes and instructors for the Kenai college.

Ventilation problem or not, this "open door" policy became a feature of the college's management style. Even now, in the 1990s, the college director's office follows that same policy.

Office policy aside, though, most of the time Clayton was on the road, going from school to school, community to community, talking to chambers of commerce, Elks Clubs, fishermen in restaurants, employers of all sorts. Around the Homer boat harbor, Brockel was a familiar sight.

"Hell, it was plumb comical to see what happened when Brock hit the harbor," recalls Jim McDowell, editor of the Cook Inlet Courier. "There was always five, six fisherman standing on the floats, jawing about something. They'd scatter when they saw Brockel coming. Scared he'd form 'em up into a diesel mechanics class or talk 'em into teachin' a net mending workshop!"

Anywhere on the Peninsula there was an educational need, a course offered or requested, Clayton Brockel involved the new college in setting it up, publicizing it, finding an instructor for it. First aid classes, taxidermy classes, cooking classes; academic classes for credit, training classes for job skills, general interest classes (like building a dog sled or learning about the "new math" being taught grade school kids.)

And because the mobile administrative office (0l' Blue, Clayton's 1963 Chevy sedan) could be found anywhere there was even the suggestion of a road, College-sponsored classes sprouted up in Clam Gulch, Moose Pass, and Hope; in North Kenai, Tyonek, and English Bay. There were classes in Seward, Homer, and Ninilchik; in Kasilof, Kenai, and Soldotna.

When adult education started on the Peninsula, it started in a small city school system with a nearby military base. Within three years, Clayton had moved from a part-time adult education director to a half-time director of university courses to a full-time resident director of a community college. There was no building, no bookkeeper, no college secretary. The Borough School District kept all the records, wrote all the checks. The College used the Kenai High School as an answering service and mail drop.

And yet, by 1966, the college program included some 200 students and offered 16 classes in Kenai, Seward and Homer. While credit-hour production is a standard method of evaluating how much student activity a college generates, many of those early classes were noncredit, and even more were tuition free. Courses in geochemical prospecting, marine engine maintenance, net mending, and first aid were taught around the peninsula as part of the university's statewide Extension Service. The College cosponsored those classes, but all were credit and cost-free.

Few of those classes were large, and even the ones offered for credit could hardly afford an instructor. "Boyd Shaffer had a teaching 'route' for a while," Brockel remembers. "He'd teach a taxidermy class in Seward, an art class in Moose Pass, an oil painting class in Cooper Landing, another taxidermy class in Soldotna, another art class in Ninilchik, and then a winter survival class in Homer or Kenai. And even at that, I don't think he made gas money for that old Ford Bronco of his. But he loved to teach."

Instructors from Homer or Moose Pass taught classes anywhere on the peninsula. Clayton himself criss-crossed the instructors' paths, searching for still more classes. The program grew . . . and grew.

And, in January, 1976, the University of Alaska in Fairbanks announced that Founding Director Clayton Brockel had decided to retire as of June 30, 1976.

In 13 years of unparalleled growth, the college had changed from a five-class evening program to an institution offering job-skill certification programs on a major scale as well as high school equivalency, general interest, and formal two-year associate degrees.

The college was well established at its site alongside the Kenai River. The Phase I Building (McLane Building) and Phase Il Building (Goodrich Building) were in active use. The Phase III Building, which was to house the Library, was under construction. Programs were expanding in all directions. It was a busy place.

Clayton expressed his appreciation to the "hundreds of people who cared about the college, from the dedicated professional and classified staff members who have served so well over the years to the men and women from all walks of life who spent so much time on advisory committees, helping the college grow. I wish I could list them all, thank them by name," Brock said. "But we don't have adequate records. We were too young to be thinking about history—we were too busy trying to make things work, trying to keep the college above water."

Later, and less publicly, Clayton said, "I was tired. I thought it was time for someone else to take what we had done-all of us--and do something with it. We had a campus, a couple of new buildings, a booming petrochemical job training program. The orchard was starting to bear fruit, but I was burned out, tired out. I gave it a lot of thought, for about a year. And then I decided.

Clayton Brockel is also mentioned in this article: