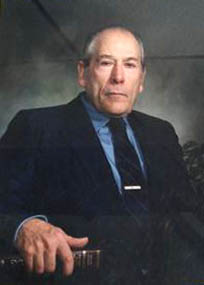 This portrait of Walter Ward is displayed in the Ward Building

Walter Ward had other interests besides fencing and driver's education. Walt's interest in educational programs that provided life and job skills was a major force in shaping the direction of a major portion of the college's educational program. He started working for the Kenai Peninsula Borough School District early in its history—in 1966, as financial director. He came to the Peninsula from Palmer, where he was an agricultural instructor from 1958 to 1961. In 1962, he was the principal at Palmer High School.

The new borough school district used Walt Ward's skills and energy and practical experience in a variety of ways. Because there were more jobs to do than there were people, Walt, like many others, switched hats several times a day. Besides managing the finances, he was also administrative assistant in charge of new school construction. In 1968, his job title was assistant superintendent of operations and vocational education. For a while, Walt Ward was acting superintendent of schools, holding things together. He was good at that, and recognized throughout the state as an educator who could keep programs together, make them survive.

"At one time, Walt served on every vocational education committee and board there was, from the University of Alaska in Fairbanks to the State Department of
Education to some higher education consortium in Seattle," Clayton Brockel recalls. "And he was the chief go-between between the college and the school district here."

Walt served on the College Advisory Board, which later became the College Council, and was instrumental in linking the college to vocational funding sources. "The College had good programs," Walt said. "We were meeting the needs of people and employers. All I did is point it out to the State Department of Vocational Education. They could see the college was doing a job, and doing it well. Of course they supported it."

"Of course they'll support it. . . . " sums up Walt's attitude about worthy programs in job skills. And he made sure "they" did by putting his own energy behind the projects. For example, when Walt got a Driver's Education program started in the School District, it was literally a mobile program, housed in a white, windowless bus that looked a little like the fuselage of a World War II bomber. In order to make that program work, Walt himself would trundle that white bus down the road to the next school, park it and make certain each of the driver's ed simulation consoles worked.

Another of Walt's long-time interests was fencing, which he taught as an evening course at the college for years. It was disconcerting to see, at night, in the commons, the masked, padded, gauntleted fencers clanging away while other students went to welding classes, literature classes, and art classes. But there was no inconsistency for Walt, despite the apparent anomaly. "Fencing is a practical skill," Walt said. "It just hasn't been much of a job skill for the last couple of hundred years."

In 1979, Walt became the associate superintendent of Planning and Operations for the school district. In 1983 he retired. When he retired from the school district he also resigned from the College Council after 14 years of direct service. The council recognized his departure with a resolution commending his involvement: "He has been vital in the establishment of instructional programs and has supported the development of the College in word and deed; and he has represented the Kenai Peninsula Borough School District administration in promoting higher education for the Kenai Peninsula Borough."

The college waited almost 10 years before honoring Walt Ward again by dedicating the "Phase Five" Vocational Building for him. The building had been completed in 1982, but had gone unnamed until January, 1992, when it was named after Walter Ward in ceremonies held at the College. The two-story vo-tech building was the last building to be completed at the college. It has classrooms, offices, computer and electronics labs, and welding and mechanical technology shops.

It's particularly appropriate that this building be named the Walter E. Ward Building. It's solid, orderly and useful.