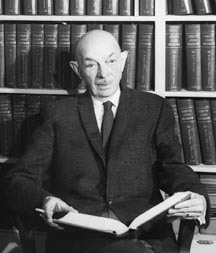 At the time of his retirement in November 1971, A. H. Ziegler was the oldest practicing attorney in Alaska, having practiced since he was admitted to the Alaska Bar in 1915.

He was born in Easton, Maryland on December 20, 1889, and received his schooling there. While in high school, he began the study of law under an attorney named Stewart who was formerly a major in the Confederate Army. He came to Alaska in 1913 and continued his study of law in Juneau where he was admitted to the Alaska Bar and practiced until he entered the Intelligence Service of the United States Navy during World War I.

He came to Ketchikan in 1919 and was instrumental in forming a local veterans organization that later became the American Legion Post. Mr. A.H. Ziegler was a charter member of the Ketchikan Elks Lodge No. 1429.

He served on the Territorial Board of Education from 1935 until statehood in 1959, and most of the time was either president or vice-president. His activities in the field of education had a great effect on the Territory of Alaska prior to statehood.

Ziegler was active in business as well as politics. He was chairman of the board of directors of the First National Bank of Ketchikan and had been associated with the bank since it was founded in 1924, serving many years as bank president.

At the time of his retirement from the active practice of law, Ziegler was senior partner in the firm of Ziegler, Ziegler and Cloudy in Ketchikan. His son, State Senator Robert H. Ziegler, Sr., follows the family tradition by virtue of his position in the law firm.

The community and a major employer combined to lift Ketchikan Community College over a new threshold in 1967. Ketchikan Pulp Co. donated land above the city and Ketchikan Gateway Borough voters approved a bond for construction of the Ziegler Building at Seventh and Madison streets. The facility opened in autumn 1969, housing a library, classrooms, administrative offices and labs for clerical and vocational training.