In July, first work began on the well. It was drilled in solid rock, is 147 feet deep, cased with 6-inch casing and cost approximately $2,000 but it has furnished sufficient water for the needs of the College Hill and, according to chemical analysis, has the best water in the country. The results are gratifying because the well cost the trustees more annoyance than any other one thing in the construction of the college. It seemed to bother some of the legislators in 1919, too, for it was used on several occasions of the Board of Trustees. Evidently they had never drill a well in solid rock either!

The board of trustees purchased all materials and contracted for the labor for the construction of the building. Work progressed rapidly and by the 15th of November, the building was practically completed. The $60,000 proved insufficient for the purposes for which it was appropriated. The Territorial Legislature of 1921 appropriated $41,000 of which $8,999 was set aside for the president's cottage. This was constructed during the summer of 1922.

We now come to the most important act of the Board of Trustees—the selection of the executive head of the college! That officer would mean more to the college during its first few years than at any other time. His responsibility would be greater. Upon him would depend, to great extent, the whole organization and policy of the institution. Above all he must be a good business man, for funds were limited and every dollar spent must bring a dollar's worth of returns or more, if possible.

While the Board of Trustees had this matter under consideration, the name of Charles E. Bunnell was presented. He seemed to possess those qualifications which would successfully initiate the work at the college—he had the necessary scholarship, had been a teacher, a lawyer, and for seven years, judge of the District Court in the Fourth Division, was known to be a tireless worker, a good business man, and had wide acquaintance over the territory. On the 11th of August, 1921, he was elected President of the College, assumed his duties on the 7th of December and under the authorization of the Board of trustees, left for the States to perfect his organization. He visited various colleges and universities, familiarizing himeself with the work of schools of agriculture and mining, selected the faculty and purchased furniture and equipment. By June 12th, 1922, he was back in Fairbanks ready to prepare for the opening of the college. 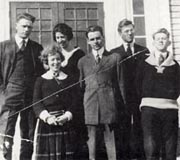 On the 13th of September, the college was dedicated. It was an event in which every Alaskan everywhere must have joined, in spirit if not in person—Fairbanksans more especially for the college was near. Under the leadership of W. F. Thompson, editor of the News-Miner, over $400 was subscribed by Fairbanks citizens to do honor to this occasion. Arches were erected at the beginning of the automobile road leading to the college and at the entrance of the College ground marking the way. The road was made like a boulevard and special trains were provided on the railroad. The school children carrying the flags, headed by the band, marched from the school building down Cushman Street over the bridge, where the Governor reviewed the parade, and on to the special train which took them to the college. At the entrance to the grounds, the school children, Boy scouts, native sons and daughters, and college professors in caps and gowns, stood at attention as the long line of automobiles filed by, then fell into line and marched to the college.

Promptly at 2 o'clock, the band began playing the "Star Spangled Banner" and the big flag was unfurled. all stood with bowed heads for the invocation. Governor Bone delivered the address from the college steps. It was a wonderful address, full of hope and encouragement and promise for the college.

On September 18th, 1922, at 9 a.m., the Alaska Agricultural College and School of Mines opened its doors for work. Six students were enrolled. As I watched the long line of students, a few days ago, coming over the hill from the College after their days' work, it was with a feeling of peculiar satisfaction that I recalled the first time I came to the hill.