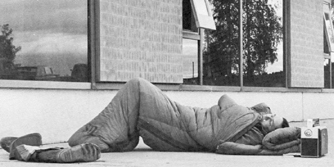 This story about the university's important role in Fairbanks' 1967 flood appeared in July-August 1967 issue of Now in the North.

At the height of the influx, all of the university's 27 major buildings, except its flooded warehouses on low ground, were being used to house refugees. 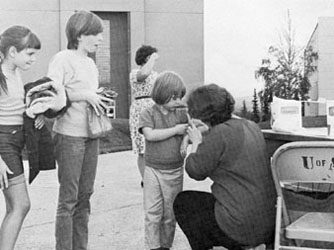 Robert Mathison, manager of Hi Continental, the university's food concessionaire, reported that the Commons had only enough food for 24 hours. University Comptroller Harold Byrd, acting as food coordinator, contacted the military and local food outlets and supplies were rushed to campus by high-wheeled military trucks, able to roll through flood waters otherwise blocking the main access road to campus.

Responding to the call for help, refugees joined ranks with university personnel to double the regular Commons staff of 75 workers. They helped serve meals that totaled as many as 15,500 on one day and 68,000 for a week. At times, the serving line snaked out of the Commons and wound, four abreast, past several campus buildings.

The Commons also served as an emergency food distribution point for residents on high ground in areas surrounding the campus.

With food and housing under control, university officials tackled other phases of administrating and providing for the needs of evacuees.

An infirmary went into operation on the first floor of Wickersham Hall, one of two girls' dormitories on campus. Registered nurses in the ranks of the evacuees staffed the facility.

Joseph Moisan, student activities director, near the Patty Building, set up an outdoor “kennel” and nearly 100 dogs were rounded up. A veterinarian volunteered his services.

In the Patty Building Gymnasium, university students supervised a recreation program for young evacuees. A regular schedule of movies began for both adults and children in the Duckering Auditorium.

To keep both refugees and the regular university community informed, the Department of News Service and Publications issued a mimeographed daily newspaper. Morning and afternoon editions were issued under the masthead, "High Water News." As flood waters ebbed, the masthead was changed to the "(Even Lower) High Water News." Flood victims were informed of procedures for restoring damaged property and goods by the university's Division of Statewide Services, which posted sets of instructions throughout campus buildings.

Arthur Buswell, dean of the division, said the instructions had been prepared for victims of the tidal wave caused by the Anchorage earthquake in 1964 and that 200 sets had been left over. The division began printing additional sets for later distribution throughout the flooded area.

The offices of the Polar Star, the student newspaper, were made available to the staff of the Fairbanks Daily News-Miner, unable to publish because of floodwaters in its plant in downtown Fairbanks. News-Miner personnel used Polar Star equipment to prepare stories for later publication.

Soon after the first evacuees arrived on campus, the Salvation Army rushed food and clothing to the university. A food distribution point was established in the Geophysical Institute under the direction of David Chauvin, head of technical services for the institute. The second floor snack bar in the Student Union Building became the clothing distribution center.

On Thursday of the week of the flood Gov. Walter J. Hickel and representatives from federal disaster aid agencies flew to the campus to address a meeting of more than 300 Fairbanks businessmen in Schaible Hall. Dr. Wood had invited the merchants to the campus to plan recovery programs.

The next day, Mayor Elmer Rasmuson of Anchorage and president of the university's Board of Regents arrived on campus by helicopter and promised the full support of his city in helping the Fairbanks area recover from the flood.

Gov. Hickel returned to the campus on Saturday with Sen. E. L. (Bob) Bartlett and Rep. Howard Pollock and together with Dr. Wood and other officials, toured the campus to inspect evacuation facilities and programs. Later, Sen. Ernest Gruening also toured the university.

At the end of the first week, the number of refugees on campus dipped below 5,000 as families began to return to their homes. The second week saw a steady outflow of evacuees. By the time the university's fall registration began on September 9, the campus as an evacuation center was history.