Otto W. Geist: A Legend In His Own Lifetime, Part 2

Charles J. Keim, dean of the College of Arts and Letters, and longtime personal friend of Otto Geist, issued this UA News Release on Aug. 6, 1963.

After the poor cleanup, the miners whipsawed out a boat and floated back to Bettles. Otto had lost interest in mining so he again went to work for Dubin aboard the Teddy H. That summer of 1925 he began collecting Eskimo artifacts and learned about their locations in the Arctic. The previous year he met and started a lifetime friendship with Dr. and Mrs. Olaus Murie. The former taught him to skin and mount birds and small mammals. Dr. Murie, who was to become a world famous naturalist, was at that time studying caribou in the Arctic. He encouraged Otto to attend the Alaska Agricultural College and School of Mines at College, Alaska and to offer his services to Charles Bunnell, the president. Dr. Murie wrote a letter of recommendation for Otto and sent it to President Bunnell.

During one visit to President Bunnell's office, Otto was shown a small box of artifacts which Clarence L. Andrews, historical and popular writer on Alaska, had just sent to the college. Otto examined the specimens with interest then showed his own collection to President Bunnell. They both agreed that it was important that somehow the college initiate a program of archeological and ethnological research in Alaska. Otto washed dishes and waited tables at the Model Cafe in Fairbanks and took short courses at the college. As soon as the 1926 breakup arrived, Otto headed north to locate old village, burial and fossil sites. He used the funds he had earned at the cafe.

After his reconnaissance trip of 1926, which took him to many parts of Arctic Alaska and to St. Lawrence Island, Otto brought a tremendous collection of material to the college. Greatly impressed, President Bunnell provided support for other expeditions. Otto agreed to perform the work free. He informed a reporter that, "To my mind, Alaska presents a veritable treasure ground for scientific specimens of prehistoric races, with the key probably to the migration of ancient man from European or Asiatic countries, or possibly the reverse."

Supported now by the Territory and national organizations, he spent the next many years mounting expedition after expedition which gained him international acclaim. At home, too, he gained considerable recognition. One honor he cherished was his initiation into an Eskimo clan on St. Lawrence Island in 1927. The Eskimos named him "Aghvook," which means whale. During World War II he served as a major in the Alaska Territorial Guard. In 1957, the University of Alaska conferred upon him the honorary degree of Doctor of Science, and the citation read at the ceremony nicely summarizes his activities: "Otto William Geist, pioneer Alaskan archeologist, paleontologist and naturalist. Born in Eiselfing, Bavaria, and came to the United States, which he served honorably as a soldier in three wars.

"Initiated the archeological work on St. Lawrence Island; contributed greatly to the geographical knowledge and Eskimo nomenclature of that island; secured for the University of Alaska museum one of the largest Eskimo archeological collections in the world; is chiefly responsible for the present status of that museum; gathered thousands of natural history specimens for the University of Alaska and other institutions; made the only accurate observations of the Black Rapids Glacier advance in 1937; conducted several expeditions in the Yukon Territory and Alaska; has been in charge of the Frick Laboratory collection in Alaska; publisher of the book 'Archaeological Excavations at Kukulik' and of numerous articles; has always been generous in sharing his vast amount of scientific information.

"Fellow of the American Association for the Advancement of Science, the American Anthropological Association, and Arctic Institute of North America; member of numerous other scientific societies." 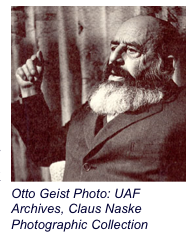 Dr. Ivar Skarland, head of the department of anthropology at the University of Alaska and one of Dr. Geist's closest friends, added a postscript to the university's citation when he heard of Dr. Geist's death:
"He spent 74 years serving his fellow man. He was a real Alaskan and a true friend."

Otto Geist is also mentioned in these articles:

University of Alaska Museum of the North

University of Alaska Museum: History of the Herbarium