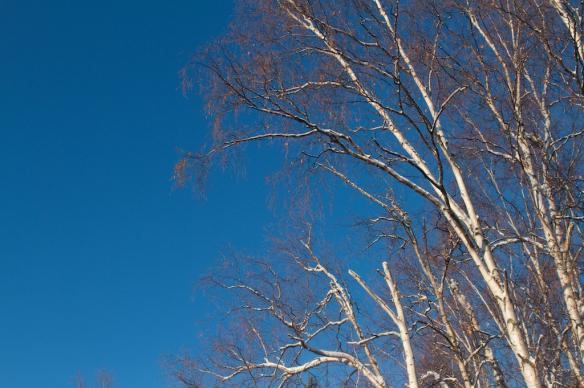 Blue skies and sunny hillsides– sure signs of spring. Photo by Monique Musick

Employee charges for UA Choice to increase in FY13

The vetting process of a proposed health care cost-saving measure that would ban tobacco users from future hire at the University of Alaska is under way. All feedback and, more importantly, workable solutions to controlling UA’s health-care cost challenges, are still very welcome.

President Gamble and Human Resources Interim Chief Donald Smith discussed the subject at length with Staff Alliance during the group’s retreat March 23, and more dialogue with governance groups is expected. President Gamble said he’s willing to evaluate all viable ideas that might slow the growth of UA’s health-care costs.

“We have enormous expense in this area—$65 million dollars total, or nearly $16,000 annually per enrolled employee, with the university paying over $13,000 of that,” the president notes. “We’ve got to do something that can move the needle. It can’t be superficial."

The university brought the tobacco proposal forward on March 15, in conjunction with communications about employee charges for the health plan for FY13. Employee charges will increase beginning July 1 and will cover a $3.5 million shortfall in the employee’s 17 percent share of the plan from FY12.

Open Enrollment, the annual period in which employees can make changes to their selection in the UA Choice health care plan, runs from April 16 through May 15.

UA engaged a consultant to forecast cost avoidance if a hiring ban on tobacco users were in place for new hires after July 1. The answer was $21 million in expenses avoided over a 15-year period. Over time, as current employees who use tobacco retire or leave due to normal staff turnover, the resulting healthier workforce and dependents on the plan would result in significantly less expense to UA employees.

National data show that tobacco users require an additional $1,700 each in plan benefits per year on average.

The numbers were compelling enough that the administration took a serious look at implementing such a policy. Similar policies have been adopted successfully across the country and in Alaska, including Providence Medical Center, Alaska Airlines and others.

But is it right for UA?

Employee concerns raised about the proposal, which would affect only new hires after July 1, primarily center on how it would affect faculty and staff recruitment to the university. For example, top research faculty responsible for bringing in millions of dollars in important scientific research grants to the university each year sometimes originate from countries in Europe and Asia, where smoking rates are much higher than in the United States. Another concern is recruitment in small towns at community campuses, where the labor pool for hard-to-fill jobs of every kind is already quite limited.

There are other options that might be more acceptable if the tobacco hiring-ban is not deemed right for UA, including trimming plan benefits, adjusting plan design, eliminating certain optional choices, and other approaches. President Gamble is encouraging employees to be patient as the process, which is still quite fluid, moves ahead. What can make a large impact on slowing future growth in plan costs is a healthier pool of employees and dependents on the plan.

A list of Frequently Asked Questions about employee charges and the tobacco issue can be found on HR’s benefits website at www.alaska.edu/benefits. You can also find a memo from Smith and a chart showing employee charges at the site. UAF’s Grapevine also addresses the issue in some detail at http://www.uaf.edu/grapevine/.

If you have questions or concerns about the tobacco policy, contact Smith at donald.smith@alaska.edu or Benefits Director Erika Van Flein at ervanflein@alaska.edu.

Board meeting set for April 12-13 at Kenai Peninsula College

The Board of Regents will travel to the Kenai Peninsula on April 12-13, 2012, for a two-day meeting at the Kenai River Campus in Soldotna.

Board members will take part in groundbreaking ceremony for the new Career and Technical Education Center and the new student housing facility, both of which were approved by voters in a 2010 General Obligation Bond vote. Regents also will participate in the unveiling of a plaque in the Brockel Building to honor KPC's founding director Clayton Brockel.

Action items on the academic and student affairs agenda include a Bachelor of Arts in Special Education at UAS; a Master of Arts in Teaching for Special Education at UAS; and an Associate of Applied Science in Medical Diagnostic Sonography at UAA. On the facilities and land management agenda, formal project approval for the Mat-Su Arts and Learning Center will be before the board, as will a HVAC upgrade at Kuskokwim Campus.

Public testimony will be taken at 10 a.m. Thursday, April 12, with a second opportunity for those who can't make that time at 9 a.m. Friday, April 13. The full agenda will be posted on the Board of Regents' website the week of April 2. Watch for a press release from Public Affairs as well.

Since October 2011, the University of Alaska Strategic Direction team has asked the question “What would you like to see in your University of Alaska System?” So far the team has conducted nearly 70 listening sessions on UA campuses throughout the state. By mid-April the team will have completed the first phase of the strategic direction project, conducting an estimated 82 listening sessions with Alaska community leaders as well as UA alumni, students, faculty and staff.

The comments from these listening sessions will help identify how the university can improve value and service to students and to Alaska communities. If you were not able to attend any of the sessions, you can still be a part of Shaping Alaska’s Future 2017 by participating online in the same survey that was presented to stakeholders on UA campuses. Your input is vital to the success of this project.

It might be helpful to take a few minutes and familiarize yourself with the project by logging on to our website. There, you’ll find a tab titled Reports and Documents. This page contains reports, current strategic plans and other important information.

The UA Strategic Direction process is a part of “Shaping Alaska’s Future 2017.” Please take a few minutes, log on and join in the discussion!

When the House Finance Committee took statewide public testimony on its version of the operating budget two weeks ago, more UA advocates turned out than did the supporters for any other entity or issue, and House members noticed. It is important that Senate members hear the same message.

The subcommittee members accepted the version of next year’s operating budget that passed the House several weeks ago, and made several additions. This latest proposal is an $8 million increase, 2.3 percent over the current fiscal year. It is $4.9 million more than the governor’s proposed budget, and $600,000 above the budget that passed the House.

You can find a side-by-side comparison sheet of the regents’ budget, the governor’s budget, the House’s budget, and the Senate subcommittee’s budget here: Budget Summary FY13 Capital Budget

The Statewide Administration Assembly met March 14. The following is an overview of the meeting and is published in the Statewide Voice as a courtesy to Statewide employees. All meetings are open to the public, and Statewide workers are encouraged to contact their governance group to address workplace concerns, policies and other matters affecting staff. If you have any questions please contact SAA president Monique Musick at mmusick@alaska.edu.