A new course is being charted for healthcare—a course that can be difficult to understand but one everyone should be informed about. The Statewide Voice will be covering the Affordable Care Act and how it relates to the University of Alaska employee in a new monthly series. Our goal is to help staff understand healthcare reform with ease.

As a new employee for the Office of Public Affairs, one of my first tasks was to research previous issues of the Statewide Voice. One issue kept surfacing—one that I didn’t know belonged in workplace discussion—tobacco. I learned that there was a push from the University of Alaska relating to tobacco use. It was proposed that the university would not hire tobacco users in the future, an initiative created to help control healthcare costs.

I’m not a tobacco user, but the declaration made my head spin. I never thought about my professional life and personal life meeting that closely. The healthcare system and my approach to it seemed to have natural consequences. I make unhealthy choices, and I pay for it. End of story, or that’s what I thought.

I now understand that initiatives like tobacco restrictions are created to help with an overall healthcare crisis. Lockton, the university’s health plan consultant, projected that UA’s health plan costs would double in seven years unless significant changes were made. The government and insurance providers are now taking a bigger role to help make healthcare affordable to everyone—but the impacts of that legislation could mean increased costs for employer plans such as the university’s.

In order to lower costs and make healthcare more available, providers across the country have implemented many changes to current healthcare plans. UA has already complied with many of the healthcare mandates handed down from the federal government. Many more adjustments will be made in 2013 and through the next five years until 2018.

In a meeting concerning these adjustments with Erika Van Flein, Director of Benefits at the Statewide Benefits Office, and Michelle Pope, Director of Payroll and Benefit Accounting, Van Flein explained that this is one of the most significant healthcare reforms ever presented federally.

“There have been various legislative changes and laws passed over the years that have affected how we manage the health plans,” according Van Flein. “The healthcare reform law is the biggest, most comprehensive package we have ever had to deal with. Before this, most legislation was focused on specific benefits like maternity care or mental health benefits.”

Many parts of healthcare reform will result in cost increases that will be passed on to employers and employees. “On an individual basis, it’s not going to have that much impact on a person who already has coverage except that costs will likely increase,” said Van Flein.

In addition to changes in cost, the employee will also see changes to W-2 forms, more detailed plan information at open enrollment, and additional mandates. In this series, the terms will be broken down into focused categories with details about the mandates and when they will be applied to UA health plans.

Several adjustments were made in July of 2011 to ensure compliance with new mandates. UA replaced the $2 million dollar lifetime healthcare benefit maximum with an unlimited lifetime maximum.

“These additions haven’t impacted UA health costs as much as we thought they would,” Van Flein explained. “For the most part, the dependents generally seem to be healthy individuals.”

The university had these restrictions to protect the health care plans from being “shopped for insurance”—a term used to refer to potential employees who look for an employer who has the best benefits and goes to work for them primarily for the benefits.

“The insurer has to put some restrictions in place to prevent this,” Van Flein said. “The company can’t just open the door and the checkbook to anyone that walks in. You have to have some control from a business management standpoint. We do have programs, restrictions, in place to protect from this shopping. But now, with these new mandates, we have less ability to protect ourselves from being shopped.”

The healthcare conversation continues in next month’s issue. We will cover information about the Joint Health Care Committee, Staff Health Care Committee, and a newly formed health care task force, all groups who review the health plan and recommend changes to the university, or review and provide feedback on changes proposed by the administration. Later article topics include the rising cost of healthcare in Alaska, the impacts of tax law changes and the most effective options to be healthier overall.

All comments or issues related to healthcare are welcomed. Please contact me, Rachel Voris, directly to add your voice to this conversation and help guide it. 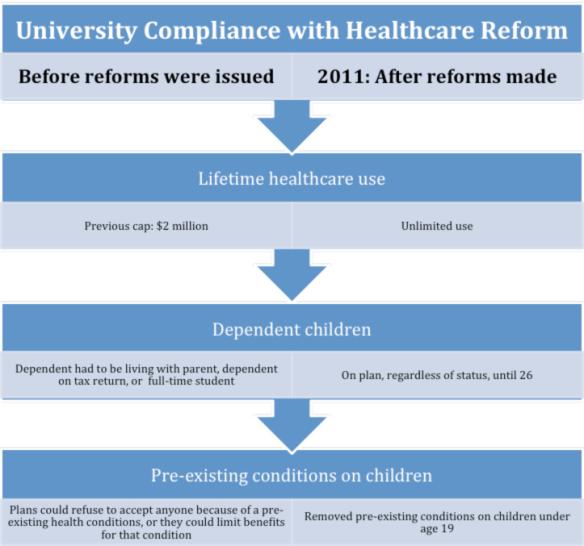 The legislation includes a long list of health-related provisions that began taking effect in 2010. Key provisions are intended to extend coverage to millions of uninsured Americans, to implement measures that will lower health care costs and improve system efficiency, and to eliminate industry practices that include revoking and the denial of coverage due to pre-existing conditions.Source

Dependent  — a covered person who relies on another person for support or obtains health coverage through a spouse, parent or grandparent who is the covered person under a plan.

For a more detailed definition of dependent for the university employee, please refer to the current UA Benefit Handbook, page 15.

Grandfathered Status/Plans – Health plans in existence with one or more enrollees on March 23, 2010. In order to maintain grandfathered status, plans can only make limited changes to benefits, cost-sharing and other provisions of the plan that were in effect on March 23, 2010 (date of enactment of the health care reform law). Source

Lifetime benefit maximum – A cap on the amount of money insurers will pay toward the cost of health care services over the lifetime of the insurance policy.

Pre-existing condition exclusions – An illness or medical condition for which a person received a diagnosis or treatment within a specified period of time prior to becoming insured. Health care providers can exclude benefits for a defined period of time for the treatment of medical conditions that they determine to have existed within a specific period prior to the beginning of coverage. Source