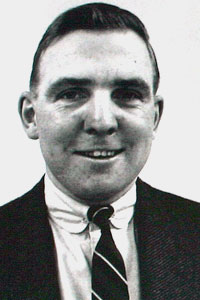 "I do think this is a matter of the greatest importance and deserves further consideration by the Convention. Now, initially, I will agree that, eventually, we must accept such a section in order to obtain statehood. I will also agree that, if we should put such a section into our constitution as proposed here, there is probably another way around the matter of accepting an enabling act we don't like. We could probably refuse to set up our state government, as has been suggested on the floor. I think this approach that I suggest is a more direct and a more -- perhaps "honest" isn't the word -- but a better approach to it. Now why does the question arise at all? It arises because we are holding our Constitutional Convention before the passage of an enabling act. Should we be doing it the other way around, the enabling act would be before us; we would know what it says, and we would write our constitution, present it to the people of Alaska for ratification, and should the people of Alaska not like the enabling act, or not like the constitution itself, they could reject it. Most of the enabling acts have made that provision; moreover, they have made the provision that, in that event, we could call a second constitutional convention, and should the people turn the second constitution down, there would be no more conventions held under that particular enabling act. That method has always left up to the people of the State of Alaska the final say on whether or not they want to accept statehood under the terms of a particular enabling act, but we are now in a position of drawing our constitution before an enabling act is passed. We have no way of knowing what that enabling act will finally say. That is why the question arises.

Now we have already dealt with this matter on two other instances. First of all, the original Committee Proposal No. 16 came out, it had a Section 2 which read. "The State of Alaska and its people hereby consent to all and singular the provisions of the enabling act that is passed by the Congress and approved by the President for the admission of Alaska into the Union of States." We all, or the great majority of us. agreed that that was a blank check that we should not, and in clear conscience on behalf of the people of Alaska, could not sign until we struck that section. We have, just a few minutes ago, taken a similar action in relation to the boundaries of the future State of Alaska. Why? Because we cannot sit here and say we will accept any boundaries. So that in our resources article we have defined the boundaries as the boundaries of the Territory of Alaska existing upon the date of ratification of the constitution. That will give us the option in the future, should a partition plan be proposed, to say "yea" or "nay" to that partition plan.

Now this matter before us is merely the same thing all over again, albeit perhaps a lesser degree. Section 2, as proposed by Mr. Smith, that we adopted yesterday, reads: "All provisions of the act admitting Alaska to the Union, which reserve rights or powers to the United States, as well as those prescribing the terms and conditions of the grants of lands or other property made to Alaska, are consented to fully by the State of Alaska and its people." Now I will agree that, under certain sections of the constitution, we cannot be discriminated against as a state and that we have certain protections under the constitution. I am referring here primarily to the "terms and conditions of grants of lands or other properties made to Alaska." Now the question arises; is there harm in adopting this section as we have adopted it? I say there is harm. It was pointed out yesterday that improvements in statehood bills have been won over a period of many years by dint of hard work, and I would suggest that further improvements are not necessarily impossible, but here we deliberately say we consent to the terms and conditions of the grants of lands, whatever they may be, and in so saying we suggest to congressmen that we are not interested in further improvements in statehood bills. We suggest to them in writing that, if they wish to make the terms more restrictive or less attractive, that we are not going to object. For example, the Resources Committee, in considering the great problem of handling our resources, has felt, I am sure unanimously, that a period of 25 years is not sufficient to intelligently and thoroughly study the problem and make the selection of our 100,000,000 acres of land. We would like to see Congress change that to, say, 50 years.

Why suggest here in writing that we are satisfied with the enabling act as it stands? More seriously, I feel that in adopting this section we tie our delegate's hands. We remove from him what little bargaining position he has and we have to go back to less than a year ago, if you recall, the withdrawal proposal that was made, or several withdrawal proposals that were made. Those withdrawal proposals, even among those of us who were working hard for statehood, wanted statehood badly, wanted to accept it under almost any terms, threw us into consternation for a period of time. Perhaps some of us were willing to accept the withdrawal proposals immediately. Perhaps, after a week or two of consideration we were willing to accept it, but the fact remains that there was doubt passed; the fact remains that our delegate to Congress initially, did not know what to say to some of these proposals that were being made until he heard from the people of Alaska. And I say to you that if we put this section in the constitution, unnecessarily, we are tying his hands and removing from him what little bargaining position he has in trying to get for Alaska the best statehood enabling act that he possibly can. Even worse for us here, I feel that the insertion of this paragraph gives to whatever opposition there may be to the ratification of our constitution, an ideal, ready-made platform on which to stand.

Earlier, in urging the committee members on the resources article, Mr. Riley referred to a campaign of distortion,and I say to you, that this Section 2 which was adopted yesterday provides the grounds for the greatest campaign of distortion that you have ever seen. Now in the current statehood enabling act there is a provision that the state must retain title to all its minerals. Those of us here may or may not like that provision. We may or may not agree that it is going to be there whether we like it or not. I will be the first one to agree that there appears to be very little chance of ever getting that changed, but I would also like to point out that, of all the matters contained in the enabling act, that is far and away the most unpopular among the people of Alaska and not necessarily just among the mining industry. It is unpopular among the homesteaders, the man in the street, and everyone I have talked to, and I think that for us to sit here and deliberately, in writing, accede to that and cut the ground out from under individual Alaskans or groups of Alaskans who hope to go to Congress and try and get that changed, would be folly of the highest order. It would be the simplest thing in the world for people who are opposed to the adoption of the constitution to embark on a campaign of distortion and say that the delegates to the Convention are willing to accept statehood, if the Congress gives us one acre of land, or if they are going to propose withdrawal programs in the next statehood enabling act, they won't withdraw just 40 per cent of an area north of a certain river, but will withdraw the whole State of Alaska. There is a serious question under the current withdrawal provision as to the rights of the people living within that area.

Now I might be willing to accept that and you might be willing to accept it but how easy it is going to be for opponents of statehood to go to the people and say, "Maybe that one is all right but the next one is going to be worse and do you want to accept that?" Now, the question arises: is it necessary for us to put this provision in the constitution now, and I feel that it is not necessary. I cannot conceive of a single congressman or a single senator, taking into consideration the fact that we are adopting our constitution prior to the passage of an enabling act, being offended by the fact that we have not inserted such a section in our constitution. It seems to me that a reasonable congressman or senator would admit to himself that that was merely the straightforward, businesslike approach for the people of Alaska to take, that the people of Alaska want to see the wares of Congress before they buy and I submit that there is nothing unusual about that. Now, the question has arisen that if we do not insert this section, will it delay statehood? I submit that it won't delay statehood five minutes, whether we go by the Tennessee Plan or by some other plan. In any event, we are going to have to have an enabling act, and in any event, we are going to have to set up our state government....

Now, as I say, the amendment which I have drawn here, I think would cover the situation, would show Congress that we haven't forgotten to put this in our constitution, that we have it in our minds, but that we are not willing, as American citizens, sovereign citizens of the future State of Alaska, to sign a blank check. There is nothing unreasonable, there is nothing that anyone, in my mind, could ever criticize about that action."

-Delegate Barrie M. White, Day 64 of the Constitutional Convention, arguing the need for the constitution to be flexible with regards to the eventual federal legislation establishing the State of Alaska.