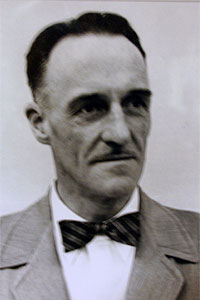 I might also say that I wrestled with this, I started out advocating that the attorney general be elected, but I wrestled with it... Because of my doubts though, I have talked to many people, they have said if you are going to let the governor's administration be held responsible for the conduct of that administration, you have got to at least give the governor an attorney of his own choice. Under this setup he might get an attorney of the opposite political faith. He might get one of his own party who is either inadequate or who is hostile to him, or who doesn't see eye-to-eye with him. In either case, the governor could say at the end of his term, if things haven't gone well, "We had a good program but that attorney general you foisted upon me wrecked our program." There again, you have got passing the buck as to who was to blame because things didn't go well. Now then, if we want to be sure that the strong executive who is going to have the responsibility of carrying out a successful administration is going to get the blame if he doesn't have a successful administration, let us not give him any outs. Let's not take him off the hook by giving him an attorney general that he can put the blame on."

-Delegate Ralph Rivers, Day 53 of the Constitutional Convention, discussing the role of the Attorney General in the Territorial Government, and the evolution of the office under the statehood model. Rivers served for four years as the Territory's Attorney General. Alaska's constitution establishes one of the strongest executive branches of the fifty states. Under the constitution, the Governor and Lieutenant Governor are the only state officers elected from the state as a whole. All other executive officers, including the Attorney General, are appointed by the Governor.