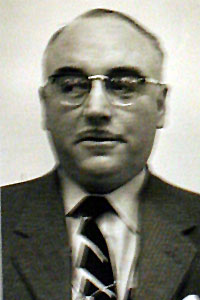 "Mr. President, it seems to me that some of the discussion could be improved as to quality and the use of words... Now, the question at stake is just how strong do you want the strong executive? Do you want the absolute one-headed form of government with one single elected official at the head of it, or do you want a certain amount of additional elected representatives put there by the vote of the people? We had a lot of discussion on that in the Committee. The ideal of the strong executive is the absolute executive, but there again if you will look back at our founding fathers with absolutism ruling, they had a great many problems and a great many difficulties. So for that reason they diffused all the powers of state down through many elected officials. They got a great deal of democracy out of that process but they didn't get much efficiency.

Now we are trying to arrive at a situation where we get both a fair amount of democracy and a fair amount of efficiency. The question is to decide how strong do you want the strong executive? Do you want somebody also being groomed in the process of administrative government heads, such as this secretary of state who can succeed to the governorship, who will be qualified by experience, and if he does a good job will probably be eligible from the voters' point of view to become governor? Many people in this body think we should have more than two elected officials; some think we should have three or four. There is a good question there as to how many the people would like to have, but I believe that every time you start centralizing in the form of appointive power in the hands of one person, you take something away from the essential idea and principle of democracy...

I believe that there should be somebody else, second in command and elected by all of the people, who could take over the succession, and who would in the same process be training himself and becoming eligible to succeed the chief executive by election of the people."

-Delegate Victor Rivers, Day 52 of the Constitutional Convention, speaking on the strong executive model in the Alaska Constitution. Delegate Rivers, who chaired the Committee on the Executive Branch, was uncomfortable with the enormous power given to the governor in the constitution. While he campaigned for more elected executive officers throughout the convention, the constitution states that the Governor and Secretary of State (title changed to Lieutenant Governor in 1970) will be the only elected executive officers of the state.