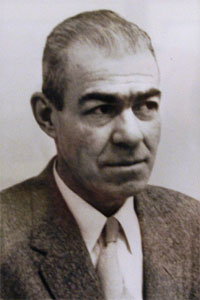 "It has been amusing to me to hear delegate after delegate come on the floor and talk about the rights of the people. They want to give the people this right; they want to give them the initiative and referendum; when it suits the purpose of the delegate speaking,then he is interested in the rights of the people. When it doesn't suit his purpose, then he doesn't believe the people should have the right. I think that is a foregone conclusion that in the Convention here, which has served its purpose not only in this, but in other matters that have been before the body.

Now, if we are going to give the people any rights, we have gone along under this appointive judge system as far as Alaska is concerned since the beginning of the Territory; we want to give the people some rights; then give them the right to elect these judges because after all these judges are the people who are going to judge the people. This way the people, in no way you read it, or no matter how you state it, this article does not give the people any rights in regard to appointing these judges. The most ridiculous thing would be statements of the proponents of this bill that while these judges have to run against their records and the people have something to say. Well, it is an old maxim among lawyers that judges never die and seldom retire, and so you are not going to get rid of them that way, and when they run against themselves the greatest way to get them elected would be a little bit of opposition by a group.

Supposing the bar association, the attorneys, knew that a judge was bad and wanted to get rid of him. If I were a judge, just before I was ready to run for re-election or to run against myself I would get the bar association good and burned up at me and ask them to come out in the papers against me and then the general public would vote me back in by probably the biggest vote that was ever cast in that particular type of election. We get into a matter that they say is nonpolitical. It is nonsense to say it is nonpolitical. It is the most political situation and fraught with all sorts of elements which make for politics here."

-Delegate Robert McNealy, Day 62 of the Constitutional Convention, speaking against the process in the Alaska Constitution for the establishment of a Judicial Council, composed of laymen and representatives of the Alaska Bar Association, to make recommendations to the governor for judicial appointments. The process was approved by the convention and continues to this day.