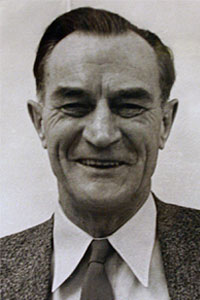 Further Information:The Jade Lamp - the story of the lamp used at the signing of the Alaska Constitution

Quote from the Convention:

"Delegate Peratrovich has talked about this, and the delegate I talked to during lunch time says this has come up at every Indian or Native convention he has attended. It comes up because it is never settled and every morning here we pray to the God above to guide us and direct us and I wish that His ambassador, Jesus, were here this afternoon and would show you the way to vote on this question. Here is a letter addressed through me to this Convention from an Eskimo living up on the Bering Sea, and there are many more letters here, but this is a typical letter addressed to the Alaska Constitutional Convention at the University of Alaska so it is addressed to you through me.

In the second paragraph: "I have something to bring up myself in connection with our land problems, mostly of our fishing camps and our homes. Around here in Unalakleet, and also around outlying villages, we have fishing camps, from way back without anything to show in papers, claims or clear titles -- only fish racks, tent frames and cache stands to show, and there are particular places for fishing and camping, whether they are in the beach or on the rivers, they are in the main places we are to catch our winter needs each year. By what I have gone through I can say this much -- it is pretty hard winter when some outfit gets into his camp and uses it for nothing -- I have not fished at my camp site for three seasons because some outfit is working in it. I would suggest strongly we need to have our fishing camps rights, and settle it. Settle it to have any outfit or any organization as a group to pay for using any camp site instead of doing anything as they please with any camp site. This part of Alaska is still hard living. It is not developed yet, no roads built yet to go any place where we want to or to go near our trap lines. We still use dogs to go places in winter. We need to have our seasonal living livelihood to get by each year until something is done in this part of the country. Also, our homes here in Unalakleet, and in other villages, too, we don't own lots for our homes. We don't have any clear title for our homes. We have been under reservation too long. Most of us young people begin to realize that. Reservations are just getting us behind in many ways of living as an average American citizen. We begin to realize that we have been put aside as Natives too long. We young people would like to see our children grow up as any average American living citizen, living with equal rights as white men. We are just as good a human as anybody from black to white. Here's wishing you lots of luck, your friend, George Lockwood, Unalakleet, Alaska."

...This man is appealing to you for his little livelihood; for what he already owns, these titles were good. All this bill asks for is that you give clear title to the home ground where he lives and to his camp site. Those titles were good in the Native land when the Natives lived there, but the oncoming civilization which is crossing over an older civilization has made inoperative those titles that were once good and I maintain it is up to us to make good those titles. These people, now in our preamble -- we speak of the pioneers of Alaska. Well, they are great. You see a man with boots on, a packsack, a pick and shovel, and a pan. We speak much in our Convention here about founding fathers -- great men they were, but greater men and many more of them lived long before the founding father or before the prospectors hit Alaska, and there are 30,000 of those people living here now in Alaska, and we have passed them by, as George Lockwood says, too long. These great people have done great things for us. We would not be here now if these people hadn't come here and had taken up this land and showed us the way...

After the war a new group are coming -- not to get rich and get out -- but they are coming to raise families and make their homes in Alaska. They want to do right by the people that are here, but this Convention can do something about it, can correct an evil. Many people, Eskimos, Indians,and Aleuts have born, lived, and died waiting for the blessing of the great "white father" to settle on them under the aboriginal rights and they have not been treated right. They have missed their blessing, and the time has come when the great "white father" to settle down on these people what he has promised them. "A pal's last need is a thing to heed; a promise made is a debt unpaid." George Lockwood is my pal and your pal, and he is pleading to you now; and there are many George Lockwoods over the Arctic and in many places asking you to come and help them out. It is not their fault -- they don't want anything different than anybody else. They want to be just like you and me -- equal. We have destroyed their title by our new civilization. The government has promised them great blessings. Generations have come and lived and died and the blessing has not settled upon us. We can make this document live if we will just make clear the title and here is all I want you to do under this amendment...

He (George Lockwood) lives right there (pointing to map) on a little piece of ground and he wants a title to it. He has a fishing camp up here. He would like to have title to that five acres. There is where the military is now occupying camp for three years, and pushed him aside. The cats have destroyed his blueberries, the beach where his kiddies played they can't play there anymore, and for three years he has been dispossessed of that position by the military who are building a radar station up here. If he had title to that ground, as you and I would have, he would have no complaints, so in the name of decency and honor and common ordinary right, I ask this Convention to adopt this amendment and let George have his ground saved for him and a little camp site where he makes his living by fishing and hunting. That is all this amendment does. We can make this Constitution with heart and soul and justice in it if we just do that little thing and not forever pass by these people that are pleading to us. We have problems here; let's recognize them. I believe this Convention has the honor and the justice and the will and the free-wheeling among them to do this job which the United States government has been unable to do. Aboriginal rights have nothing to do with it. It merely clears title for his home site and for him camp site and that is all that does. I present it the best I can. I have a very humble way of presenting it, but I hope you realize the moment and the greatness of this little request by George Lockwood. There are many more letters here if you want to read them, but this letter tells you the story. I have told you the story and it is up to you. Let your conscience be your guide."

-Delegate Marvin "Muktuk" Marston, Day 57 of the Constitutional Convention, speaking in favor of a Native Land Claims provision in the Alaska State Constitution. The motion failed, and Alaska Native land claims were settled by the US Congress with the passage of the Alaska Native Claims Settlement Act (ANCSA) and the Alaska National Interest Lands Conservation Act (ANILCA) in the 1970's. George Lockwood, the Alaska Native whose plight was described by Marston at the convention, was compensated by the builders of the radar station for his loss of a fishing season. Lockwood finally received the deed to his land after he and Marston staked out a five acre claim, which is now part of a his native allotment of 160 acres. George and his wife Helen raised their nine children on the site (Source: Reaching for a Star by Gerald Bowkett).