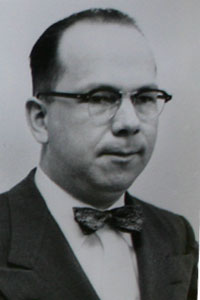 "We in our Committee felt that it would be the wishes of the majority of the Convention to have a strong executive. By that we did not mean a dictator, one who would get into power and be the absolute power in the state, but one who through appointive powers would be able to select his co-workers down through the various offices so that when the state's functions would be successful we could say that we had a good governor, and when they would not be successful we would know who to blame and could vote accordingly at the next election. Mention has been made not only here on the floor but also the same argument in the Committee that the governor would have certain obligations and would be expected to lean toward that obligation in the appointing of an attorney general, but I can't help but feel that that same trend of thought would run right down through the other departments, and I believe that there are other departments under the governor that are of equal importance and if the governor is going to bow to party obligations or other obligations in selecting of the attorney general, he will do the same thing all the way through his other department heads, and we won't have a man in there that we can be fully proud of, and I think we are going to want to elect a governor who will be able to stand on his own two feet and appoint the men that he feels should be in the office. I think if he is that type of man he will not only be respected by one party but by all of the people of the state."

-Delegate Maynard D. Londborg, Day 55 of the Constitutional Convention, speaking about the intent of the Committee on the Executive Branch to establish a strong governor, with the power to appoint most of the heads of state departments.

( Juneau) – Governor Frank H. Murkowski Friday ordered state flags to be lowered to half-staff on Monday, September 13 in honor of Rev. Maynard Londborg, a delegate to the state Constitutional Convention and a signer of the Alaska Constitution. Londborg died on Sunday, Sept. 5, in Westminster, Colorado. He was 83.

Londborg spent 20 years in Unalakleet where he founded and taught at Covenant High School. He also worked at a children’s home there. Londborg and his wife, Loraine, came to Alaska in 1946 to serve as missionaries in Yakutat.

Londborg remained involved in educational issues throughout his career and maintained a strong interest in the history of the Alaska Constitution. He attended reunions of the delegates to the Constitutional Convention and spoke to numerous groups about his memories of the process.

State flags will be raised again at the close of business on Tuesday, September 14.