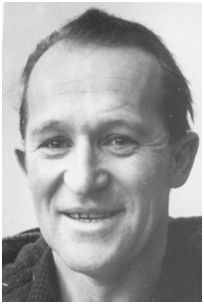 From the News Archive: 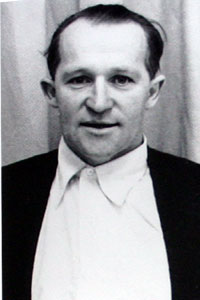 "I suggest that as a last compromise, a small compromise with the bigger ones we have made, that we at least change the spelling of this borough to b-o-r-o. I don't see any reason at all why we should stick to this u-g-h spelling. It hasn't changed since Chaucer used it. It has a nostalgic reference looking back towards New York and further beyond the ocean towards England. The spelling of b-o-r-o is commonly used in connection with and affixed to town names."

-Delegate Yule Kilcher, Day 69 of the Constitutional Convention, speaking in favor of changing the spelling of the proposed local government unit from "borough" to "boro." The amendment failed on a voice vote.

THE ASSOCIATED PRESS / THE JUNEAU EMPIRE

HOMER - Yule Kilcher, a long-time Alaskan who helped write the state constitution and later served in the Legislature, died Tuesday at Homer Hospital. He was 85.

Kilcher, a native of Switzerland, was the patriarch of a family known for its singing and yodeling. Among his grandchildren is Jewel Kilcher, the Grammy Award-winning pop singer who performs under her first name.

Born in 1913, Kilcher left Europe in the mid-1930s as the Nazis were rising in power. He visited Alaska in 1936 and returned four years later to carve out a life working close to the land.

He established a 660-acre homestead on Kachemak Bay east of Homer that became a popular stop for musicians, military figures and politicians. Dixie Belcher of Juneau, a longtime friend, said visitors ranged from German millionaires to Hollywood producers to Cambodian priests.

"He sure impacted my life and the lives of everyone who met him by the force of his personality,'' said Belcher, 58. "He had tremendous life force.''

Kilcher married Ruth Weber, also from Switzerland, in 1941. While the couple hardly knew each other when they were wed, they raised eight children during their 29-year union. Ruth, who remarried after the couple divorced, died last year.

Kilcher was among the delegates to Alaska's pre-statehood constitutional convention in 1955-56, and he served in the state Senate from 1963-67 before returning to Homer.

Belcher said she and her husband met Kilcher at a reception at the Governor's Mansion in the early 1960s.

"He was a really, really outrageous character,'' she said. "He was a Renaissance man. He spoke a lot of languages.''

In English, Belcher and Kilcher would have running debates practically every time they ran into each other, she said.

"When we'd go to receptions, I'd always end up talking to Yule,'' Belcher said. "And always, because of his personality, we'd always get into a fight. We'd fight all the way down the street.''

Belcher remembers one visit to Kilcher's homestead, where she took an early morning walk and heard the sound of two men screaming. She opened the door to Kilcher's cabin to find her friend in a heated discussion with a ranger visiting from Kenya. The debate, she said, was over tribal cattle ownership rights.

"Yule had a very, very definitive opinion about everything. He was always right,'' she said.

Kilcher is survived by his eight children, five of whom live in Homer, along with numerous grandchildren and great-grandchildren.

Gov. Tony Knowles has ordered state flags flown at half-staff on Saturday, the day of Kilcher's funeral. He will be buried on his homestead.

Reprinted with permission from the Juneau Empire