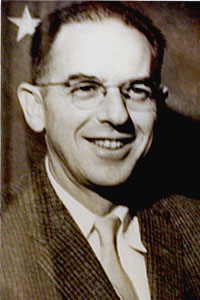 "The matter of a capital city of a state is an extremely important decision, one that basically should be geared to the economy of that state, one that must be considered in the light of present circumstances as well as future circumstances. I think that, in all sincerity, Palmer is an ideal location for the capital of Alaska. It is centrally located insofar as area and present population is concerned and it would appear within our knowledge in projecting population that it will continue to be relatively near the center of population as our great State of Alaska continues to grow. I call attention to the fact that it is accessible by all means of transportation with the possible exception of water. We have rail service; we have excellent paved highway service; we have an airport capable of handling DC-3's, and within a very short time will be served by a scheduled airline. It is presently the center of many important governmental administrative agencies. They have made the decision purely on a basis of saving administrative costs and placing their personnel in the center of the area within which they work...

Now I certainly recognize the many problems inherent with such a move but I feel that the facts will demonstrate that where the capital is located in the State of Alaska it will stay, and the dollars and cents that enter into the argument must be computed on a longtime basis. I am sure that the savings to the State of Alaska and to the people of the State of Alaska as a result of having the capital located in Palmer will far offset the immediate and temporary loss that may accrue to those people whose businesses presently depend upon the capital being in Juneau... We have gone through this Convention in the days that we have been here in what I think is a wonderful manner of cooperation and putting aside of local interests, and I hope that you will not feel I introduced this amendment purely as a local interest matter, granted, of course it involves local interest, but yet I think it is more important that we consider the matter from a long-term basis. So keep that in mind and whatever decision we arrive at will be the proper one, just as it has in the case of considering other proposals. I ask that you give my amendment your most serious consideration.."

-Delegate James Hurley, Day 63 of the Constitutional Convention, speaking in favor of his proposed amendment to the constitution which would have declared Palmer, Alaska to be the capital city for the State of Alaska. The amendment failed by a vote of 12-40-3. The location of the state capital continues to be a contentious issue in Alaska.