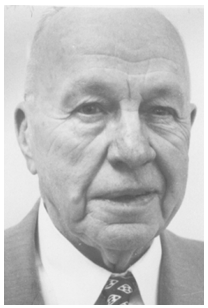 "Bear with me just a moment. I realize that this has been a great emotional scene. It brings back to my mind the organization of the First Territorial Legislature. We met there, as the members of this Convention have met here, to organize a First Session of the Legislature forty-three years ago; to bring back to my mind that there are only three surviving members of that legislature. We wound up our duties with the same emotional scene as I have experienced here today. In that legislature we formed a friendship that was enduring, and little did I think that forty-three years from that date that there would be only three surviving members of that legislature -- the Honorable Henry Roden of Juneau, the Honorable Charles E. Jones of Nome, and myself. In all those years that friendship has become stronger and closer between the three of us, and I can see here today that the association and the friendship and the existence that are here within this Convention is going to bind the personalities of each and everyone of you that will endure for time to come when we enjoy the statehood of Alaska. Little did I think at that time, forty-three years hence that I would be a member of a Convention that was drawn here by the people of the Territory of Alaska to draft a constitution for the first statehood, and I say to you, it has been a wonderful experience, and as years go by the younger members will remember the meeting of the individuals of this Convention, and it will be cemented in friendship that will endure to help carry on the workings of the future State of Alaska."

-Delegate Ernest B. Collins, Day 76 of the Constitutional Convention

From the News Archive:

E. B Collins Rites Will Be 4 p.m. Sunday

A funeral service for pioneer Alaskan E. B. Collins will be conducted Sunday at 4 p.m. in the meeting hall of the Pioneers Home on Airport Way.

The service will be conducted jointly by Rev. David K. Fison of the First Methodist Church and Pioneers of Alaska, Igloo No. 4.

Pioneers will then conduct graveside services at Birch Hill Cemetery where Collins will be buried in the pioneer plot.

Funeral arrangements are being handled by Chapel of Chimes where visitation hours have been set for Saturday from 7 to 9 p.m.

This distinguished pioneer and his wife became guests of Alaska 's first Pioneers Home at Sitka in August 1961. Collins, who was Speaker of the First Territorial Legislature when legislation leading to the establishment of the Sitka home was passed, headed a "delegation" of pioneers transferring from Sitka to Fairbanks.

Born in Farmland, Ind., in 1873, Collins moved to Chico, Calif. with his family in 1881. After completing school, he entered the law office of a prominent attorney and was preparing to take the bar examination in the summer of 1904 when he went to Seattle on vacation.

In Seattle he met two friends who were planning a trip to Skagway. The friends lost courage (and gambled their resources on the horses), and E.B. left for Skagway alone.

In Skagway he met two men who were building a scow. He joined them and when their craft was completed they floated down the Yukon to the mouth of the Tanana, where they took a steamer to Fairbanks.

His first mining efforts were on Bear Creek, but proved fruitless. One night he walked 27 miles to Fairbanks to get some salt. In a gambling hall he met an old acquaintance, Jack Schropshire, who persuaded him to move to Fairbanks Creek with him. He then wrote home and advised his family that he would not be home that winter, but would return the next spring. But his mining efforts proved to be successful, so in the spring of 1905 he advised his family that he would remain in Alaska for still another winter.

In the meantime miners from the various creeks decided to organize for the purpose of seeking federal legislation. This was E.B.'s first political effort, and he was elected to represent Fairbanks Creek miners on the Miner's Council. Every 30 days he mushed into Fairbanks to meet with the Council, and many resolutions were sent to the Department of the Interior and the U.S. Attorney General, but to no avail.

The first Territorial Legislature was non-partisan, and E.B. was elected from the 4th District. He became the speaker, and during this first session the Suffrage Act was passed, several days in advance of the federal act. The Pioneers Home was established as a result of legislation passed in this session.

E.B. served as speaker in the second session, elected again on a non-partisan basis.

In 1917 he was defeated for the House because he was devoting full time to his mining and did not campaign. The man who was elected in his place failed to serve and the House was short one member.

In 1919 he was again elected to the House as a Republican (the first partisan election in Alaska),

In 1921 he was elected to the Senate. En route to Juneau he decided to go via the route of the railroad then under construction. He took the construction train from Nenana to Healy, and then on foot he traveled alone to Curry in a hike that took him five days. He rested at surveyors' camps. From Curry (then known as Dead Hope) he took the train to Anchorage.

In 1923, after serving the first two years of the 5th session of the Territorial Legislature, he resigned to become Assistant U.S. Attorney in the 4th Division. This position took him to every section of his district as he visited the commissioners. He considers this to be one of the most interesting and important periods of his life.

In 1932, when the administration changed, E.B. left the office of the U.S. Attorney and started his own law practice in Fairbanks. The practice grew and in the 1940's Charles J. Clasby became his partner in the firm of Collins and Clasby.

In the meantime, E.B. continued his political activities. Les Nerland remembers persuading him in 1934 to run for mayor of Fairbanks. "He agreed, providing I would run for councilman," Nerland recalls.

E.B. was mayor of Fairbanks from 1934 until 1938. During that time he did much to get Fairbanks started on the trail from being a rustic frontier town to a modern city. "He laid the ground work for having the streets paved and a sewer system installed," said Nerland, who succeeded E.B. as mayor.

E.B. and Tillie were married in 1936. Nerland recalls Tillie as a quiet and retiring person, but Jack Link, director of the new Pioneers Home and a friend of the Collins for years stands in awe of her prowess as a huntress.

"She could go out and get a moose or caribou all by herself," Linck said, adding that she was a good fisherman too.

"Collins is quite a guy," said John Butrovich, who served with Collins in the territorial legislatures of 1947 and 1949. "They just don't make them any better."

"He was quite an outdoor man," Butrovich said. "He'd drop anything to go hunting or fishing."

Clasby mentioned that when Will Rogers and Wiley Post came to Alaska on their ill-fated 1935 flight, they landed at E.B.'s cabin at Harding Lake. E.B. helped them gas their plane for the flight north.

After the plane's crash near Barrow, E.B. worked for four years leading the drive to acquire and place the present memorial at the crash site, Clasby said.

Mr. Collins is survived by his widow Tillie who came with him to the Fairbanks Pioneers Home from the Sitka facility in July. Collins was the first pioneer to register in the new Fairbanks home where he celebrated his 94th birthday July 19.

Mr. Collins attended the last Pioneers of Alaska meeting with his wife. That meeting was held at the Pioneers Home at the invitation of guests there. It was the first such meeting of the Pioneers lodge at the home.