Did you know that the University of Alaska Museum of the North has the only suspended full skeleton of a bowhead whale anywhere in the Americas?

Did you know that the University of Alaska Museum of the North has the only suspended full skeleton of a bowhead whale anywhere in the Americas?

Harvested by Alaska Native hunters in 1963 near Utqiaġvik (formerly Barrow), the 43-foot long bowhead skeleton has been in the museum's Mammals Collection since 1965, but only the skull has been on exhibit. Now, a special exhibit of the full whale allows visitors to see the full skeleton suspended from the lobby ceiling. The skeleton, a permanent installation at the museum, is a featured element in a special exhibition called “Perspective: Ways to see a whale.”

The special exhibition gives the museum visitors the opportunity to see the bowhead whale from the perspective of Native and non-native artists, writers and whalers, photographers and engineers. Visitors may inspect the tiny animals a bowhead hunts for food, feel the weight of whale bone, and hear what a whale hears from beneath the ice.

And while the bowhead is the most majestic of the skeletons housed at the museum, it isn’t the only one. Bones, bugs, bats, birds, skeletons of polar dinosaurs, and the full skull and tusks of the now-extinct wooly mammoth are all part of the museum’s extensive bone collection.

The collections at the University of Alaska Museum of the North represent thousands of years of cultural traditions and millions of years of evolution and biological diversity. Scientists have spent decades collecting and studying these artifacts and specimens, even before Alaska was a state. More than 99 percent of the museum’s specimens are kept in climate-controlled facilities away from public view in order to preserve their scientific integrity, making this special exhibit of the whale skeleton a real treat for visitors of all ages. 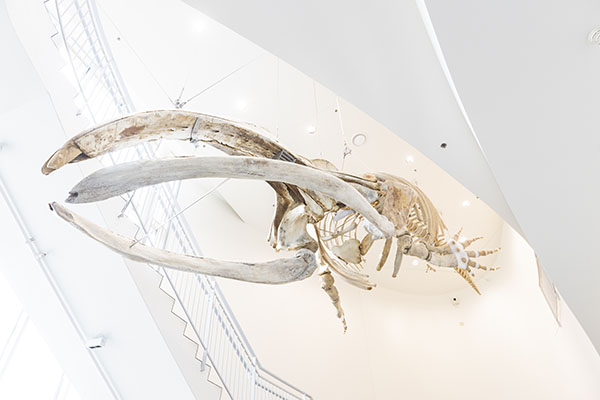