Did you know all three of our universities have been recognized as Military Friendly Schools?

Did you know all three of our universities have been recognized as Military Friendly Schools?

Viqtory, a military marketing company that connects veterans to education and employment opportunities, recently designated our three universities as a Military Friendly® School striving to succeed in the areas that matter most to veterans – making the transition from the military to school and, ultimately, to satisfying careers in the civilian workforce.

According to Viqtory, institutions earning the Military Friendly® School designation have invested significantly in programs to recruit and retain veterans as students and help them as they transition to employees, and entrepreneurs. The designation measures an institution’s ability to meet thresholds for student graduation, job placement, loan repayment, degree advancement or transfer and loan default rates for all students and, specifically, for student veterans.

Using a survey of more than 1,800 schools, 665 schools earned award level designations in Gold, Silver, and Bronze. Only 282 were selected for “Gold” award status for their practices, outcomes, and effective programs.

University of Alaska Southeast was one of those 282 schools earning gold status as a Military Friendly® School.

University of Alaska Anchorage has been recognized for the 14th consecutive year as a Military Friendly® School, earning silver status elevating it from bronze status, reflecting its ongoing efforts to develop and maintain a culture of serving those who serve. This culture centers on good policies and practices, meaningful investments in benefits, and resources and services for military and veteran students.

UAA recently created a flat-rate tuition for students who are active duty military, reserves or national guard members, and most fees are waived. UAA also has renewed its relationship with Joint Base Elmendorf Richardson (JBER), with a number of classes taught on base, and military support offices available to help service members and students.

University of Alaska Fairbanks also has been designated a silver status Military Friendly® School from the previous year’s bronze status. This recognizes UAF’s work to continue providing the best services and environment for active military students, veterans and dependents.

Like UAA, UAF offers discounted tuition for active-duty military members, military dependents and veterans. and most fees are waived. UAF also benefits from its proximity to Fort Wainwright Army Base and Eielson Air Force Base, with educational offices on both bases to assist in student training and military support.

In 2018, UAF was designated a Purple Heart Campus, signifying the university’s recognition and honor of veterans who were wounded in combat and are now pursuing their education at UAF. 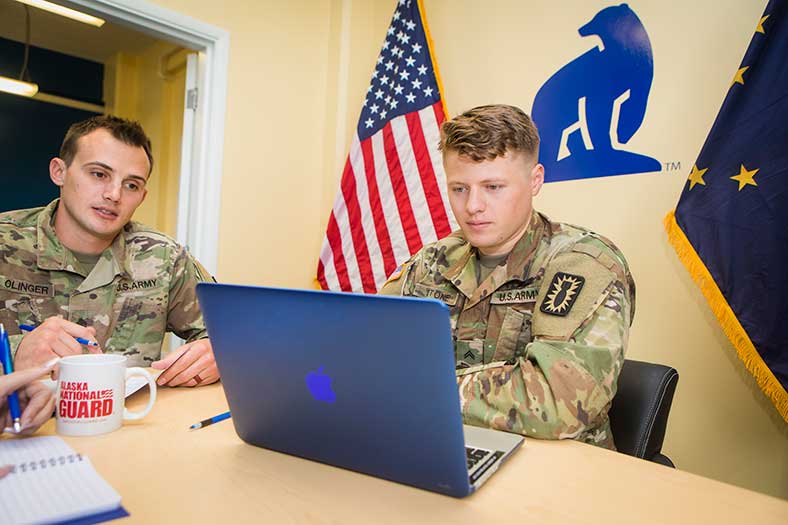