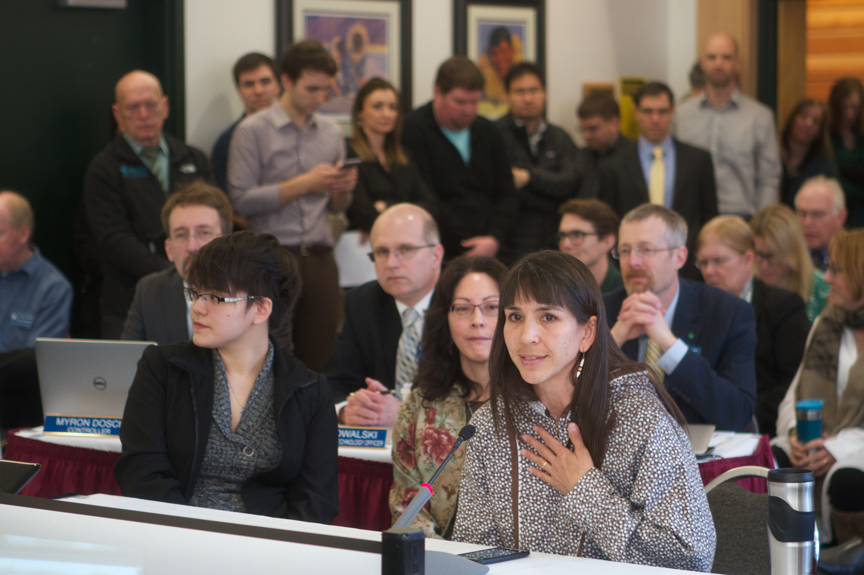 UAA faculty members Dr. Kat Milligan-Myhre and Dr. Cheryl Wilga testify to the Board of Regents before a packed room at the Lee Goruch Commons in Anchorage. They discussed their efforts to reach many more alaskan native students and get them interested in science and scientific study that matters to them. Photo by Monique Musick

A two-day Board of Regents meeting focused on tough budget and planning discussions was punctuated by some festive moments, most notably a visit from the UAA women’s basketball team just returning from NCAA Division II national playoffs, and an award ceremony acknowledging staff excellence across the University of Alaska system.

The primary focus of the meeting was a preliminary discussion of the university’s FY17 contingency budget planning and a thoughtful discussion about processes for investing in important programs in the face of budget reductions.

President Jim Johnsen said he sought the regent’s guidance to help prepare for the changes to come, and to use Strategic Pathways as the framework to evaluate the difficult choices the university faces in the months ahead regarding program, service and personnel changes.

“I’ve said all along that our job at the university is to meet state needs and show the state that the University of Alaska is an important and wise investment in the state’s future. We will lead by example and demonstrate that when faced with budget adversity, we know what to do even though the choices are tough,” Johnsen said. Those changes, he said, will occur at each campus and at the highest levels of the university’s administration.

The regents discussed two budget scenarios based on two funding options being considered by the legislature. Both scenarios call for substantial reductions, but some reinvestments in key programs as well. The scenarios also focus on making reductions at the senior leadership level – at SW and on the campuses.

“The regents were clear. We can’t allow the lion’s share of the cuts at the front line level with predictable impacts on our students,” Johnsen said. “Focus the cuts on administration and protect and invest in academic, research and other programs that serve students and meet state needs. In addition, time and again through the discussion, the regents directed the administration to merge similar program now operating on several campuses into one, unified program across the state. Finally, the regents urged the university to build in more accountability to student, employers and community partners.”

The Regents emphasized the importance of our research programs because they shed light on important issues, enrich the classroom experience, give students research experience, and bring in hundreds of millions of outside dollars into Alaska.

In addition to the budget scenarios, regents discussed the pros and cons of incorporating deferred maintenance costs into the university’s budget to prevent the continued degradation of university facilities.

Members of the university community packed the house both days to provide public testimony. Many students spoke about the important opportunities they received at the university, in particular in undergraduate research, and in support of the programs for which they wanted to show support.

The lunchtime presentation on an innovative program to increase the content, quality and accessibility of general education courses available through eLearning was punctuated by a surprise visit from the UAA women’s basketball team. Coach Ryan McCarthy shared stories about his team’s time at the National Championship game in Indianapolis and individual stories about his players, many of whom are the first in their family to graduate. For many, athletics provided a path to college that would otherwise not have been realized. The players gave each regent an autographed basketball and the regents responded with several rounds of standing ovations.