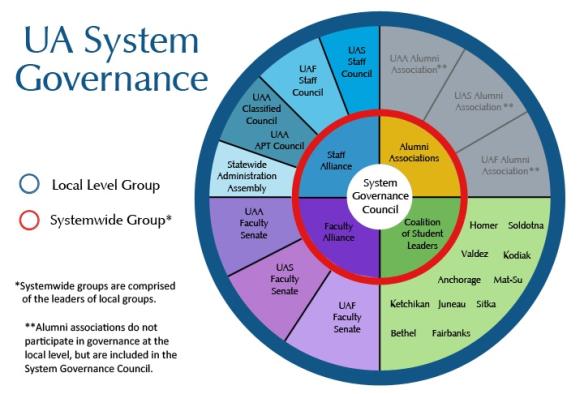 Supporting leaders and directing the flow of information throughout the system 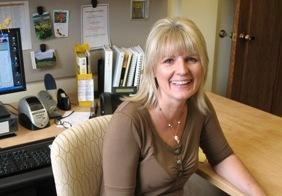 Governance is an old word which has had various meanings through the centuries. Explained simply, “governance” means not so much what organizations do but how they do it. Governance is about how an organization steers itself and the processes and structures used to achieve its goals. It is crucially concerned with how organizations relate to each other and to their key stakeholders and deals with how individuals are given a voice.

To LaNora Tolman, the new executive officer of the UA System Governance Office, governance is the opportunity for different groups of people—staff, students and faculty—to give input and to be an active voice in the direction and the control of their institution. The System Governance Office is there to make sure the information—whether from the top down or the bottom up—gets to where it needs to go. It creates processes for the exchange of information.

There are some key elements for a good governance framework: accountability, transparency and effectiveness (the latter meaning: the decision-making processes deliver on objectives). It consists of processes to facilitate participation in institutional decision-making. Accountability and responsibility is delegated within the organization to appropriate groups. This helps ensure that the varying interests of stakeholders are appropriately balanced; that decisions are made in a rational, informed and transparent fashion; and that those decisions contribute to the overall efficiency and effectiveness of the organization.

Communication is key. “Communication is essential for understanding; when there is no understanding there is no knowledge and it can stymie an institution,” said Tolman. When communication is really working in two directions, she explains, we are able to overcome problems related to personality differences, and people problems and really tap into the valuable contributions each individual is uniquely able to share. The System Governance Office is the hub for this flow of information. It sits in a truly neutral position, not taking the side of any group. Instead, the office is facilitating communication between all campus communities.

Although never directly involved in governance before moving into this position a little over six weeks ago, Tolman has been interested in the process ever since her first encounter with UAF Staff Council as an employee at the Rasmuson Library. She was unable to participate at the time, but she always kept an eye on the workings of the group. Later, as part of her duties in the UAF Provost Office as accreditation and assessment coordinator, Tolman watched the processes within the Faculty Senate and was exposed to their part of the governing process and role in accreditation and assessment. She shared an office with Jayne Harvie, head of the UAF Governance Office, and was encouraged by her to pursue the governance director position at Statewide.

Tolman has great respect for those who choose to be leaders. “I’m in awe of what the faculty actually do. And to be a leader in the faculty arena is huge. The workload and responsibility— it’s taxing on any of the governance leaders to have a full-time job and to do the leadership role,” said Tolman. “People make sacrifice in their lives to make a difference to others. I think that needs to be noted. In all three areas: faculty, staff and students.”

The staffing changes in 2013 represents the first in the history of the office. The System Governance Office was created along with Statewide during the restructuring in 1987. Pat Ivey had been working in governance prior to restructuring and held the executive officer position from its creation until her retirement in February 2012. Reviving the office again creates both a great challenge and a great opportunity for positive change. “Times are changing, so to bring this office into our modern times was enticing to me,” said Tolman.

Tolman is extremely happy to be here and is looking forward to the challenges. There is a huge backlog of work resulting from the office having been unstaffed since last fall. She is eager to provide the support to governance leaders that they have been missing since the office was vacated and to do her part to usher in a new era of governance.

The priority for Tolman is to organize the historic records so anyone can access old minutes, agendas, resolutions and motions without having to dig. She is working with records management and is personally overseeing the process of creating a searchable database of historic governance actions in OnBase. The newly hired student assistant, Monique Perry, is focusing solely on updating and maintaining the governance website and getting the minutes and agendas of all the groups posted. The governance site was recently moved into the new Roxen templates, which was one of Tolman’s first actions in office. The goal is to create an accurate and accessible record of the actions of governance groups throughout the system.

Tolman admits she was shocked by the responsibilities and duties of the office and the work the office does and believes the expectations of it are generally underestimated. Prior to Ivey’s departure there were three full-time staff members working in the office. When Tolman was hired in December, the entire office was empty of personnel. While she does not expect any great changes in the role of the office, she does see an opportunity to shift the duties and responsibilities of office staff. Tolman sees the role of the executive officer as providing support to all the governance leaders, being involved with all the groups, helping manage the flow of information between administration and governance groups and overseeing the process to ensure that UA policy and regulation and the bylaws and constitutions of the governance groups are being followed accurately. She would like to see the coordinator position elevated to an office management role, with that person focusing on logistics, budgets and coordinating. “I need to be focused on providing support and assistance to governance leaders, not arranging hotels in Anchorage,” said Tolman.

As part of her goal to work closer with governance leaders, Tolman would like to see the System Governance Council—a statewide group comprised of the leaders of each local governance organization including student government, alumni, faculty and staff—more active and engaged in conversations about the issues affecting all groups. “Where there are pertinent issues that overlap all those groups, the System Governance Council should be the place where those things are being actively discussed and not just the groups reporting their actions. The governance leaders should have discussion at that level,” said Tolman.

She would also like to help more people understand  the meaning of governance. She wants to remove the connotation that governance is just a place to vent. “You can bring your problems, but it’s so much more than that; it’s an opportunity and a process to make change. To me, that’s it in a nutshell,” said Tolman.

LaNora Tolman was born and raised in Sacramento, California. Her parents were ministers and joined the movement made popular in the late 60s and early 70s of leaving the city to go out and live off the land. “And so we did,” said Tolman. In 1974 they moved to Delta Junction and that’s where they stayed.

Tolman met her husband in Delta Junction. His family had moved there when his father was stationed at Fort Greely and then decided to retire and stay there. They got married and had three kids. In 1995 they moved to Fairbanks. Tolman started to attend school at UAF in 2000.

Tolman has been a student on and off for 13 years. She earned an Associate of Applied Business and is only five classes away from her bachelor’s in psychology. “I’ve been a real snail about it because I do have a real clear boundary between my work life, my school life and my home life. I really feel that a balanced life is so important to health. So I try not to let any of those areas overrun the other,” said Tolman.

There isn’t a lot of time left for outside interests and activities, but she does enjoy sewing and knitting and has discovered a new passion while going to school. “I needed some humanities credits, so I started taking beginning painting and am finding I really like acrylic painting. It’s very relaxing,” said Tolman.

When asked to share a favorite saying, some of Tolman’s true qualities of positive thinking, empathy, compassion and outlook really came through. In reflecting on her favorite quote, one by Mother Theresa: “Not all of us can do great things, but we can do small things with great love,” it became clear what a positive new force Tolman will be in the governance office:

“I really feel that if we really approach our lives like that, that at every moment we can put a positive, loving thing into it for a person and ignite their moment—that person might be the one to do great things. You might not. But what you say, what you do, and how you react and respond to that person that you deal with during the day, might just trigger a leader or someone who does great things.”

Welcome LaNora, we look forward to many great things from governance under your leadership.