Department leaders of those offices located in the Butrovich Building have submitted their needs and priorities for department space.

Starting next week, the group will engage a vendor to help identify how to arrange space to meet those needs and priorities.

No moves are imminent; after a space design is approved an update will be provided.

In the mean time, please do not move or re-arrange your cube space. Doing so will only make it more difficult for our vendor to evaluate and re-design space usage.

Most offices at the University of Alaska will be closed for the winter break from Dec. 25 through Jan. 2. Many will also be closed or have reduced hours from Dec. 20-22 and Jan. 3-5.

Your Employee Assistance Program (EAP) with Deer Oaks has a valuable feature that could save your life, and others' lives as well. "Take the High Road" offers reimbursement if you or a family member are unable to drive for whatever reason, whether from intoxication or extreme emotional distress, please take a cab or a ride service (such as Lyft or Uber) to get home safely.

Take a Cab and Send the Bill to Deer Oaks!

Deer Oaks remains concerned about the safety of its EAP participants and others. As part of this goal, Deer Oaks reimburses eligible employees and their dependents for cab fare in the event that they are incapacitated due to impairment by a substance or extreme emotional condition. Such circumstances may include:

The process is simple, and like all other EAP services, confidential. Simply call the Deer Oaks Helpline at (888) 993-7650 for instructions on how to submit your receipt. It may take up to 45 days for reimbursement.

This service covers cab fares up to $45.00 and does not include tip.

There's no better time than the holiday break to review your progress toward the FY18 wellness requirements! A link to log-in to your Healthyroads account is provided at the top of the UA benefits/wellness page. Remember, completing the required items means that each eligible employee, spouse/FIP will earn a $600 wellness rebate in FY19! As long as you are on the UA Choice Plan, you are eligible.

The program requirements were updated slightly this year, in that last year’s (FY17) biometric results will determine what is needed to complete for the program this year. Log-in to your account to view the information in-full, but you will fall within 1 of 3 categories:

UA's On-Site Wellness Program Manager Sara Rodewald is the person to contact if you have any questions or need additional clarification on the program and requirements.

The Statewide Administration Assembly held a regular business meeting on Tuesday, Dec. 14. Below are highlights from the meeting.

SAA will meet next on Thursday, Jan, 11 in Butrovich 204 in Fairbanks and Bragaw 210 in Anchorage. All staff are encouraged and welcome to attend. Reach out to SAA
​representatives to share your ideas and/or concerns. Additional information about SAA  ​​meetings is available on its website. ​ 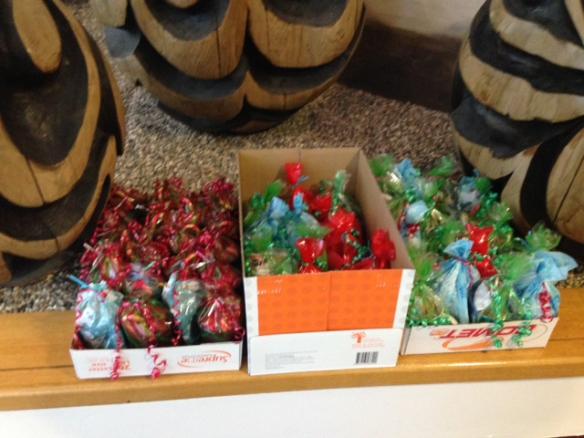 Great work elves! Thanks to your generosity 145 mugs were stuffed with candy and cocoa for the Fairbanks Food Bank. Photo by Lisa Sporleder

Everyone in our community is responsible for the protection of our customers' privacy and their personal information. However, you don't need to understand the nuances of every privacy regulation currently affecting higher education to tackle data privacy issues on campus. Whether you are working on a data breach response plan, updating institutional policies, collaborating with researchers on a new project, or educating students, faculty, and staff about data privacy, consider teaming up with your institution's privacy officer(s). The privacy officer(s) will be more than happy to lend expertise and help make sure privacy, risk, and information security considerations are carefully weighed.

Keep and use data securely.

With the 2017-2018 winter closure quickly approaching, we would like to remind everyone of critical HR deadlines.

To avoid lapses in pay, please submit and/or approve timesheets prior to taking leave. Supervisors must contact their proxy or work with their unit PPA if unable to approve timesheets by deadlines listed below. Exempt employees who will be claiming any type of leave during these pay runs must fill out and submit a timesheet by employee deadlines.

Like other UA employees, HR staff will not be working during the hard closure (Dec. 27-Jan. 2) and therefore paperwork submitted late by units will not be processed within the usual turnaround times.

Statewide HR will be open during regular business hours Monday, December 17 - Friday, December 22 (8 a.m.-5 p.m.). During the soft closure days January 3-5, SW HR will be open, but with limited staff. The phone lines will be monitored on those days, so any questions or requests can be directed to 450-8200.

The Division of Retirement and Benefits (DRB) has been working on clarifying the requirements for retirees to return to work with the same employer. After working with their tax counsel, the DRB issued clarification for employers in August 2017 in the form of a Retiree Return to Work Policy. This policy document was distributed to all participating employers and posted to the DRB website.

On September 20, 2017, the DRB published intent to adopt regulations formalizing the Retiree Return to Work Policy and a public comment period was held from September 20 to October 20, 2017. During the public comment period, the DRB received requests for clarification as well as comments. All comments were analyzed and the regulations were edited for clarity. The regulations were adopted by Commissioner of Administration Leslie Ridle on November 22, 2017 and will go into effect for members retiring or rehiring on or after January 1, 2018 who wish to rehire with the same employer.

A recurring request was for exemption of retirees working as substitute teachers with the same employer the school year following retirement. The DRB specifically addressed this issue with tax counsel who indicated no exceptions exist to the IRS bona fide separation of employment requirements, and the regulations were subsequently adopted without this exception. However, Commissioner Ridle proposes to send a letter to Alaska’s Congressional delegation requesting such an exception be granted for Alaska due to our unique teacher recruitment situation.

As an additional result of the public comment review, Frequently Asked Questions (FAQs) have been amended to reflect changes or clarifications requested by employers that were permissible.

The University of Alaska accounts on Facebook (www.facebook.com/uasystem/) and Twitter (@UA_System) provide regular campus and system news highlights, meeting and event coverage and increasing engagement opportunities. If you don't already, please follow our pages on social media today and get timely information all month long.