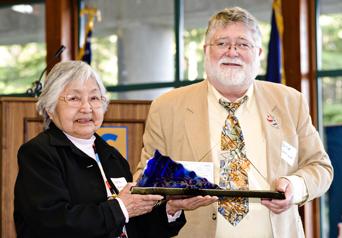 The Bullock Prize for Excellence includes a cash award and is the largest single award made annually by the UA Foundation’s Board of Trustees.

“It is with great pleasure that we announce that former University of Alaska professor Richard Dauenhauer is this year’s Edith R. Bullock Prize for Excellence recipient,” announced Jo Michalski, chair of the Foundation’s Board of Trustees. “Edith Bullock established the award to showcase the extraordinary achievements of individuals on behalf of the University of Alaska System. Dr. Dauenhauer’s work in preserving endangered Alaska Native languages, especially Tlingit, exemplifies excellence by connecting the university with our native language citizens and introducing their culture to the world.”

Described as a renaissance man, Dauenhauer is a poet, translator, Tlingit expert and a former Alaska Poet Laureate.  MORE...

The FY14 budget distribution, recently approved by the Board of Regents, included a 3.25 percent salary increase for regular staff effective July 14, 2013. Employees will see a change in their salary in the Aug. 9, 2013 paycheck.

Bowers is the administrative coordinator for the Construction Management, Drafting Technology and Information Technology Specialist programs for the University of Alaska Fairbanks Community & Technical College. Bowers recently joined the IAAP Polar Chapter in 2013.

The prestigious CAP rating certifies that an individual carries a high level of knowledge and mastery of the administrative support profession. To attain the CAP rating, an individual must meet prescribed requirements for education and work experience, and pass a comprehensive examination covering such subjects as communication, organization and planning, information distribution, records management, physical and information resources, document production, financial functions and human resources.

Congratulations to all three on this achievement!

Are you familiar with all the ways in which the UA Foundation and campus development teams partner to seek, secure and steward private gifts to UA?

The UA Foundation, in partnership with UAA and UAF development staff, is offering a comprehensive day-long seminar at UAF on Aug. 21 and at UAA on Aug. 22 to help answer all your questions about how the campuses and the foundation work together to promote private giving to UA and ensure that donors’ wishes are honored. ALL university staff members are welcome and encouraged to attend.

After an introductory "How the Foundation Partners with the Campus Community" discussion, members of the foundation and UAA or UAF development teams will lead discussions on such topics as stewardship, scholarships, fundraising support and prospect research and management. The afternoon session will focus on gift acceptance and spending - everything from special events, endowments and memorial funds to grants vs. gifts, real estate and restricted gifts. Not only informative, it will be an opportunity to meet and greet development and foundation staff and learn more about how we can partner to promote successful private fundraising for UA.

Please RSVP for either date/campus by visiting the sign-up page at http://www.alaska.edu/foundation/rsvp-for-training/

Questions? Please contact found.help@alaska.edu. We look forward to seeing you there!

The Statewide Administration Assembly held its all-day annual meeting on Wednesday, June 12. The day was packed with presentations from various directors and executives from across the UA System, an introduction to governance for new members, discussion of hot topics such as the Staff Alliance compensation proposals, draft performance appraisal tool, health care, bullying and more. An overview of what was discussed will be provided in the next SAA Highlights. The busy day ended with the election of the new officers serving for the next year.

President - Dory Straight is the Scholarship Officer for the UA Foundation.  She began her career at UA in 2008 when she moved to Alaska from Idaho.  Straight is responsible for administering the UA Foundation scholarships and awards program, along with increasing private support for existing UA scholarships.  She enjoys working with donors to lighten the financial load on UA students.  She has been married for 28 years to Ray Straight, her high school sweetheart.  They have three daughters and five grandchildren.  In her spare time, she enjoys fishing with her husband, spending time with her grandchildren, talking with her daughters, gardening, crocheting and reading.

Vice President – Monique Musick, graphic designer and photographer for the Office of Public Affairs, is a lifelong Alaskan born and raised in Ester. She attended the University of Alaska Fairbanks, and in 2001 earned a Journalism degree with an emphasis in photography.  Following graduation she became the designer and production manager for Mushing Magazine.  When the magazine was sold to new ownership, she leased the building and opened her own photo studio and gallery. Three years later the Publication Specialist position opened at UA Public Affairs and she came to work at Statewide. Here she gets to do what she loves: photography and design. She became involved with SAA in 2009. She enjoys being an active member of System Governance, supporting co-workers and participating in policy review.

Secretary - Tina Holland is currently the Deputy Director for the Health Safety and Environmental department with the System Office of Risk Services in Fairbanks. Tina has enjoyed hunting, camping, fishing, an 18-year marriage, rearing three active boys, and living and working the last 20 years in Fairbanks. 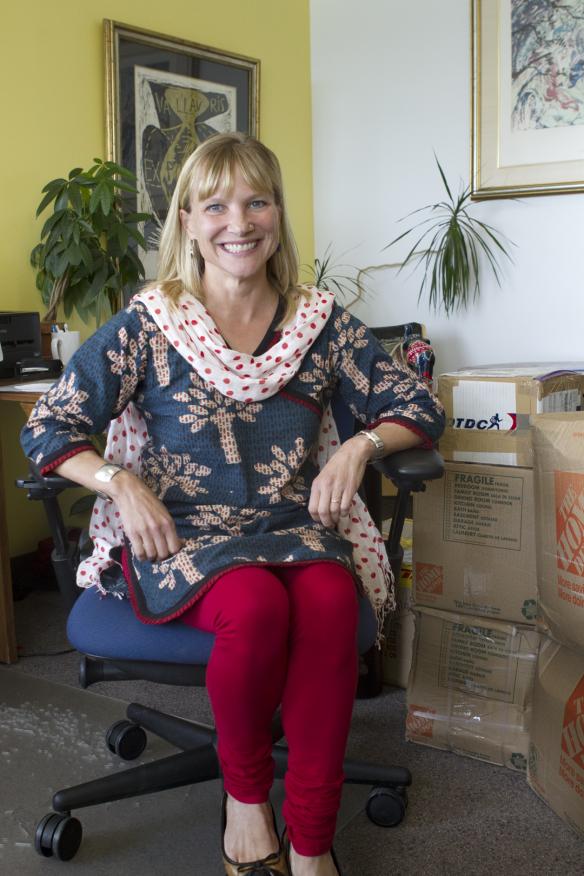 Boxes from India were not yet unpacked when Ripley returned to work in the Office of Public Affairs. Photo by Monique Musick.

Kate Ripley returned from a year-long leave of absence in India and is again serving as director of Public Affairs as of June 3.

“Our family’s year in India was an incredible experience for all of us,” Ripley said. “As much as we enjoyed the wonderful people and rich culture, we’re happy to be back in Alaska, our home.”

Ripley went on to say, “I’m grateful to President Gamble and Vice President Beam for their support. A big shout-out goes to Kate Wattum, who served as interim director. The entire Public Affairs team--Izzy Martinez, Monique Musick and our temporary hire, Rachel Voris—deserve recognition and thanks for all of their efforts.”

Public Affairs is in a transition phase as job duties and assignments are realigned to support the Strategic Direction Initiative and other priorities of the UA System. VP Beam is leading that effort.

Ripley's husband, University of Alaska Fairbanks Journalism Professor Brian O’Donoghue, was a Fulbright-Nehru Scholar for Teaching and Research at Symbiosis Institute for Media and Communications, a graduate-level program in Pune, India. He’s planning on writing a book about India’s newspaper industry and its transition to digital.

The couple brought their three children, who attended international school in the city of 6 or so million. UAF Petroleum Engineering Professor Shirish Patil and his wife Anjali Patil, K-12 Outreach administrative assistant and fiscal technician, assisted the family in numerous ways, including helping them find a house to rent and offering relocation tips. The Patils have lived in Fairbanks for 30 years but are originally from Pune.

A blog about Ripley’s adventures is still available online at www.curriedalaskan.com.

The University of Alaska College Savings Plan’s investment performance ranked among the nation’s top college savings plans in the first quarter of 2013, according to Savingforcollege.com.

The plan was ranked ninth, third, sixth and second among 55 direct-sold plans for the one-, three-, five- and 10-year periods respectively. Plans are ranked based on the average percentile rankings in seven asset allocation categories to produce a single combined or "composite" ranking.

As of March 31, the UA College Savings plan ranked in the top 10 in each category with a second-place ranking in the 10-year investment performance.

“We are pleased to remain among the top plans,” said Lael Oldmixon, the plan’s director. “The UA College Savings Plan has ranked in the top 10 in at least two of these categories in each of the last five years. We are happy to offer this excellent college savings option for Alaskans.”

The full report showing rankings for all direct-sold 529 plans can be viewed at http://www.savingforcollege.com/articles/2013-plan-performance-rankings-q1.

Alaskans can invest in the plan directly, through their Alaska Permanent Fund Dividend (PFD) or through Alaska Native corporation dividends. Everyone who elects to automatically contribute half of their 2013 PFD to the plan is entered into a drawing for a chance to win a $25,000 scholarship account or one of four, $2,500 scholarship accounts. Alaskans who did not designate half of their PFD can change their application by filing the “UA College Savings Plan” form through the Permanent Fund Dividend Division’s website at http://www.pfd.state.ak.us/Forms/index.