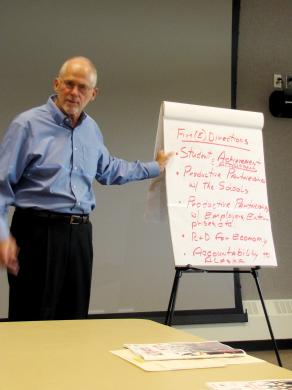 On July 23, the University of Alaska held an SDI Planning Meeting in Fairbanks. Attendees included the three chancellors and their leadership teams, UA Statewide leaders, and UA governance leaders representing faculty, staff, students and alumni. The goal: to identify themes that will help shape the future growth of the University of Alaska. President Gamble opened the meeting with an overview of why the Strategic Direction Initiative (SDI) is important to the future of higher education in the state of Alaska.

“In March of 2011, we began the Strategic Direction Initiative. Since then we have conducted some 80 listening sessions at our campuses around the state. While we’ve been doing this work, there has been a movement in higher education across the nation. Right now there are 143 measures before legislators in 35 states across the country directing where their higher education is going to go,” said Gamble.

The president pointed out that 75 percent of those polled in a recent national higher education survey said that college tuition is simply not affordable anymore.

“Nationally we have a crisis. There are no precedents because what we’re seeing in higher education is unlike anything we’ve seen before. These 143 legislative measures are an indicator of frustration. What I believe is happening is the size and the intensity of the frustration over the rising costs of education, and outcomes like lower retention and lower graduation numbers, are causing state legislatures to respond by regulating higher learning institutions. Fortunately the state of Alaska is not one of those 35 states. The reason we are here today is because we don’t want the state of Alaska to be in that position,” Gamble explained.

Dr. Terry MacTaggart, the UA Strategic Direction consultant, led the group through the process of identifying the five major themes of the initiative. They are:

President Gamble also addressed the importance of eliminating the hassle factor when it came to student achievement and attainment.

He also talked about another theme: accountability to the people of Alaska. “We, as Alaskan educators, are public servants owing our livelihood to the state. We are fortunate that the state is vested in the belief that we are going in the right direction. All of us are going to be accountable for the themes that we identify today, and, if we don’t start charting our own course, there is a distinct possibility that others will. That’s why we’re taking an early step to address these problems and issues in our strategic direction themes,” Gamble said.

The next step in the SDI process is evaluating the core themes and determining what specific problems and issues need to be solved. Throughout the meeting, one important common denominator kept coming up: it will be faculty and staff’s role to provide recommendations for solutions.

Another clear message was who would lead the charge. “The real work in the next stage of the Strategic Direction process is going to be led by the chancellors, and it’s going to be done at the university level. Our students engage in the entire system today when they go through their education process. They take courses at all three MAUs. So, from a student perspective, the approach that we need to take is going to have to be one of seamlessness, transparency and cooperation without losing the individual prerogatives of our three separately accredited universities,” said Gamble.

More information on the problems and issues that will be addressed through SDI will be included in the next issue of the Statewide Voice.