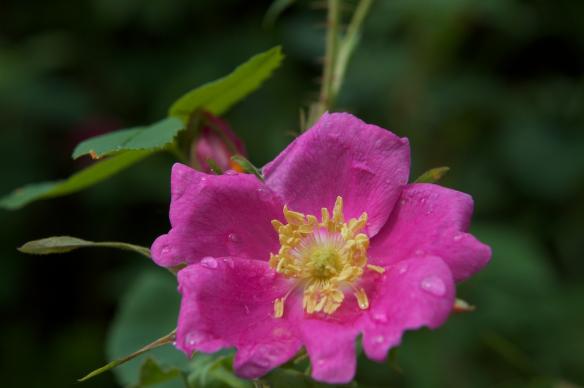 The wild rose, a brief but beautiful highlight of summer. Photo by Monique Musick.

A quick glance at your last pay stub for R14 will reveal that your health plan contribution selection for FY13 has gone into effect. The employee contribution rates for all the health plans have increased. If you changed plans during Open Enrollment, please review your pay stub at UAOnline to ensure that you are enrolled in your selected health plan.

The paycheck for Friday, July 27, 2012 (R15), will include the 3.5 percent increase in compensation that went into effect July 1, 2012. This increase was approved by the UA President, UA Board of Regents, the state legislature and governor for the new fiscal year.

The Twenty-Seventh Alaska Legislature recently recognized Patricia Ivey, former head of the University of Alaska System Governance Office, for her career and dedication to the university. Both her impressive career and invaluable spirit were noted as reasons on the certificate of recognition.

Representative Scott Kawasaki had a close relationship with Ivey. They first met during his time as a student senator and the two quickly formed a bond Kawasaki remembers fondly.

“She would organize all us young student leaders to lobby in Juneau every year,” Kawasaki said. “Pat reminded me of a mother hen, looking after all of her young ones. I still refer Pat as ‘Mom’ and there are literally hundreds of former student leaders who think the same.”

Ivey worked for the university for 36 years starting in 1975. She created and managed multiple governance offices including Faculty Alliance, Staff Alliance, Coalition of Student Leaders and the System Governance Council.

Ivey retired from her position in January of 2012 .

The Occupational Safety and Health Administration (OSHA) requires employers to train employees in the safety and health aspects of their jobs. These requirements reflect OSHA’s belief that training is an essential part of every employer’s safety and health program for protecting workers from injuries and illnesses.

The System Office of Risk Services has been providing regulatory training for statewide employees. The regulatory topics have been covered by month throughout the calendar year.

Electrical Safety was provided in April: Staff were 35 percent trained.

Ergonomics Training was provided in May: Staff were 33 percent trained (plus five UAF employees.)

Hazard Communication (HAZCOM) was provided in July: Staff were 20 percent trained (plus one UAF employee)

Many Statewide Employees have not registered or taken their required training.

Please register at the link below:
http://www.alaska.edu/risksafety/c_ehs/safety-training-1/registration-information/

Risk Services would like to extend their thanks to President Gamble and statewide staff who have attended their regulatory safety training this month.

The first system website to move over to the new "responsive design" templates will be the main UA page. This new content managed page will allow visitors to see a consistent page on all viewing platforms - desktops, laptops, smartphones, tablets, etc. So, test out the new page on all your devices and tell us what you think. Remember, this is only a test.

https://cms-test-edit.alaska.edu/alaska/index.xml
(If the page prompts you for a log in, just hit cancel.)

The Butrovich gardens are looking really good. There are still some ripe strawberries, squash are growing, herbs are getting bigger and peas and beans are on their way. Volunteers are always needed to help fight back the weeds. If everyone pulls just a few we will make light work of the chore.

Starting this week UAF grounds crews will be fertilizing the beds each Friday. We can anticipate a great harvest this August and September. Thanks go out to everyone working in the garden and to everyone parking in such way to provide access to tend the beds. Our efforts are bearing fruit!

All university employees, including regular, term, temporary, student and full and part-time faculty and staff are responsible for complying with the Alaska Executive Branch Ethics Act (Alaska Statute 39.52). The Act governs how you do your university job, and to some extent, limits what you can do in your personal life. For example, the Act regulates: Official Action that affects your personal or financial interests; Misuse of Official Position; Abuse of Subordinates; Misuse of Resources; Partisan politics; Use of information; Gifts; Participation in Grants, Contracts, Leases & Loans; Representation of 3rd Parties; and Post-Employment Actions.   Forms and More....

New parking decals are required after September 1. UAF Parking Services has opened up decal sales for 2012-2013. All forms must be submitted by August 20 to ensure timely processing and delivery of the new decal. Download the parking decal form HERE.

The Statewide Administration Assembly last met Wednesday, July 18. The August meeting will be on the 15. Beginning on Sept. 12, SAA meetings return to the second Wednesday.