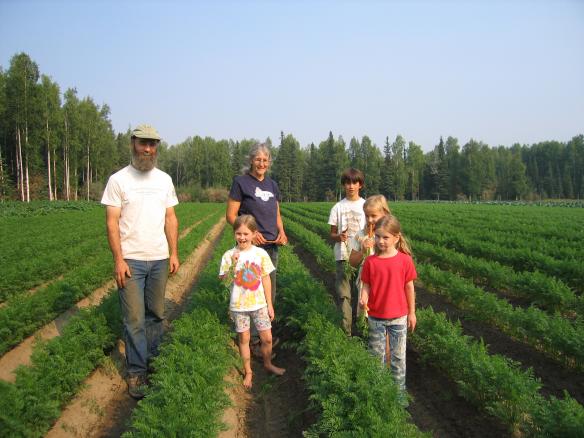 The Local Food Movement in Alaska

The local food movement expresses itself in many ways: farmers’ markets, the slow food movement, community supported agriculture, community gardens, urban farms, guerilla gardening, and so on. In Alaska, the national groundswell in small, sustainable local farming has developed in recent years as a dramatic increase in the number of farmers’ markets, CSAs, and small startup farms. The cost of petroleum; concerns about malnutrition, climate change, and the security of our food supply; and interest in green practices are combining to create this resurgence of interest in Alaska agriculture. The major university campuses, UAA, UAF, and UAS, are all involved in sustainability efforts—some of which are directly related to using locally grown food.

The recent Alaska Food Policy Council organizational meeting in Anchorage reflects this statewide increase in interest in locally grown food and food security. Many nationally known authorities on food issues have visited Alaska to give talks and seminars in the last couple of years: Marion Nestle, author of The Politics of Food; Mark Winne of the Community Food Security Coalition; and now Eric Schlosser, author of Fast Food Nation and co-producer of the documentary Food Inc. are examples.

The average size of an Alaska farm has been decreasing, while the number of farms has gone up, now at 686 farms, according to Danny Consenstein of the Alaska Farm Service Agency. Approximately 100,000 Alaskans are involved with the food industry in some capacity. Yet, only perhaps 5 to 10 percent of the food Alaskans eat is produced in the state!

This may be changing, however; there are now at least 26 farmers’ markets in the state, with weekly markets in the vicinity of every major university campus in Alaska. Community Supported Agriculture farms, typically very small, have sprouted up near every urban area and even in some remote locations. There are about 24 CSAs in Alaska. Community Supported Agriculture is defined by a close relationship between the farmers and the people who buy from them. A member of a CSA pays for a share of the harvest at the outset of the season, which enables the farmer to purchase supplies for that year (rather than taking out a loan, as is all too common otherwise). Then during the season the members pick up a share of the harvest at regular intervals (usually weekly). The members thus share the risk of farming with the producer: if it’s a good year, the members get bountiful shares, and if it’s a bad one, the shares are smaller. CSAs may include meat, eggs, or dairy as well as vegetables or fruit. The creation of a community of people connected to the farm is always a major feature of a CSA: newsletters and events such as member picnics, workshops, and get-togethers at the farm are the norm. There is also one community-supported fishery, Alaskans Own, which distributes shares of the fishing harvest in much the same way as a farmer distributes vegetable or herb shares.

There are many good reasons to eat local, not least of which is the taste! Local food is picked at the peak of ripeness and flavor; gardeners and farmers can grow more variety, and use varieties that are bred for flavor rather than for good shipping or keeping qualities. Many people prefer to eat local food because it helps them keep in better touch with the seasons; others wish to support the local economy and farming as a way of life. An important factor in eating food grown by a local farmer is that you can have better knowledge of the food you eat, where it has been, how it was grown and treated, and who has grown it—all very difficult information to obtain about food from the large-scale, long-distance food industry from which most of Alaska’s food originates. Other reasons to eat local food include reducing pollution and carbon footprints; less risk of contamination from extra handling; and responsible land stewardship.

Gardening, of course, has a long tradition in rural Alaska as well as in suburban areas. In 1955, 55 percent of all Alaska’s food was produced in-state from wild foods (hunting and gathering) and on farms and in gardens. While we now have the advantage of connections to the world’s food supplies, the resurgence of Alaska agriculture may mean that we can produce more, and ease our dependence upon outside sources—and enjoy the fresh deliciousness of local food to boot!

To find a CSA near you, contact Deirdre Helfferich at SNRAS, dahelfferich@alaska.edu, or go to the Google map CSAs in Alaska.