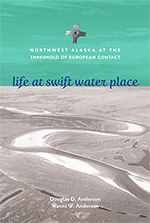 A multidisciplinary study of the early contact period of Alaskan Native history that integrates ethnohistoric, bio-anthropological, archaeological and oral historical analyses of a major hunting and fishing Inupiaq group at a time of momentous change in their lifeways. It was a time of food shortage along the Kobuk River prompted by the decline in caribou, one of their major foods. But also the time when European and Asian trade items were first introduced into their traditional society. The first trade items to arrive, a decade ahead of the Europeans themselves, were glass beads and pieces of metal that the Inupiat expertly incorporated into their traditional implements. Inter-ethnic group relations as reconstructed from oral history place the Amilgaqtauyaagmiut as the most powerful group in the area.

Douglas D. Anderson is professor emeritus of anthropology and director of the Laboratory for Circumpolar Studies, Brown University. He has conducted archaeological and anthropological research in northwest Alaska since 1960, and has authored numerous articles including Onion Portage: The Archaeology of a Stratified Site from the Kobuk River, Northwest Alaska and Kuuvangmiit Subsistence: Traditional Eskimo Life in the Latter Twentieth Century (co-authored with Wanni W. Anderson).

Wanni W. Anderson is emeritus adjunct professor of anthropology and research affiliate, Haffenreffer Museum of Anthropology, Brown University. Her work among the Inupiat from the Kobuk and Selawik rivers since 1965, culminated in numerous publications including The Dall Sheep Dinner Guest, also from the University of Alaska Press.

Archaeology of North Pacific Fisheries - The