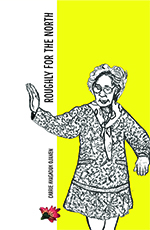 Roughly for the North

“I wish I were a dancer to let lines fall like that. / But I am dressed like you, roughly for the North.”

Roughly for the North is a tender and complex portrait of an Arctic and subarctic world. Full of lush language and imagery, each poem is an act of devotion and love to one’s family and land. Carrie Ayagaduk Ojanen weaves a moving portrait of grief, of the rippling effects of historical trauma on succeeding generations, of resilience in the face of adversity, of respect for the Alaska Native traditions she grew up in. With vivid imagery, she draws the reader into Northern life, where the spiritual and industrial collide. She uses formalism and lyrical free verse to explore the natural world and to conjure a place of staggering beauty that hides death around every corner.

A member of the Ugiuvamiut tribe, Ojanen grounds her work in a web of familial relationships. Especially important is her connection with her grandparents, members of the last generation to make their home on Ugiuvak (King Island), Alaska. With heartfelt verse, her poems reflect the staggering cultural changes her grandparents faced and the way traditional art forms continue to unite her community and help them connect to the past.

Carrie Ayagaduk Ojanen is an Inupiat writer from the Ugiuvamiut tribe. Her work has appeared in Prairie Schooner, the Louisville Review, As/Us Journal, and Yellow Medicine Review.

Echo of Ice Letting Go, The