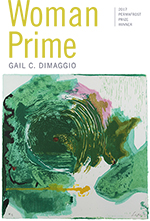 A woman is a series of shifting possibilities. The frame that contained her in the morning can transform into something completely different by afternoon. The roles she’s called on to play mutate over the years and throughout a lifetime. And her very place in the world is called into constant negotiation. In this swirl of contradictions, finding her own self—her core—can be a bewildering journey. Woman Prime is about the fundamental human wish to settle into an authentic self, a “prime” identity. It follows one woman through her roles—child, adult, wife, mother— and shows how she must remake herself through each new stage.

Like many women, the speaker believed that leaving her parent’s home, falling in love, and raising children would reveal the essential core of herself. Instead, she learns that those she loves can fail her and that she must embrace a world full of flickering and conflicting expectations for women.

Gail C. DiMaggio is a writing teacher and poet living in Concord, New Hampshire. Her work has appeared most recently in Salamander, Slipstream, Tishman Review, ELJ, and Magma.

For the Sake of the Light