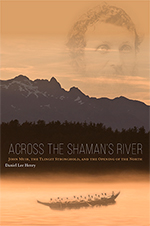 Across the Shaman's River

John Muir, the Tlingit Stronghold, and the Opening of the North

For more than a thousand years, the Chilkat and Chilkoot Tlingit controlled a 2.4 million acre homeland called Jilkaat Aani at the terminus of North America’s largest fjord. Seated at the confluence of glaciers, vertical mountains, forested valleys, and Inside Passage seas, the tribes thrived in a realm that they stewarded and defended against intruders.

Enter John Muir, father of the American environmental movement, whose Alaska expedition of 1879 may have forever altered the destiny of Jilkaat Aani residents while transforming his own relationship with Native America.

The first book to trace Muir’s journey from racism to respect for indigenous people, Across the Shaman’s River shows that as Muir’s attitudes evolved, so did his vision for wilderness preservation—a policy that would ultimately dispossess Alaska Natives from their traditional lands. In addition to extensive use of historic documents, this compelling narrative draws from previously unpublished Muir journals and the author’s interviews with Tlingit elders.

Daniel Henry is an instructor at Lane Community College in Eugene, Oregon, and the founder of the Alaska Native Oratory Society. He maintains a summer residence on a remote shore near Haines, Alaska.