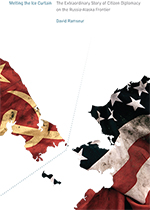 The Extraordinary Story of Citizen Diplomacy on the Russia-Alaska Frontier

Just five years after a Soviet missile blew a civilian airliner out of the sky over the North Pacific, an Alaska Airlines jet braved Cold War tensions to fly into tomorrow. Crossing the Bering Strait between Alaska and the Russian Far East, the 1988 Friendship Flight reunited Native peoples of common languages and cultures for the first time in four decades. It and other dramatic efforts to thaw what was known as the Ice Curtain launched a thirty-year era of perilous, yet prolific, progress.

Melting the Ice Curtain tells the story of how inspiration, courage, and persistence by citizen-diplomats bridged a widening gap in superpower relations. David Ramseur was a first-hand witness to the danger and political intrigue, having flown on that first Friendship Flight, and having spent thirty years behind the scenes with some of Alaska’s highest officials. As Alaska celebrates the 150th anniversary of its purchase, and as diplomatic ties with Russia become perilous, Melting the Ice Curtain shows that history might hold the best lessons for restoring diplomacy between nuclear neighbors.

Ramseur has hope that the Ice Curtain era provides us with lessons for ‘overall relations’ and wants readers to come away from the book knowing that regular citizens can bring about international change.

Yes, you can see Russia from Alaska in at least two ways. You can fly from Anchorage to St. Lawrence Island in the Bering Sea, and from there the Chukotka Peninsula of Siberia is visible on the western horizon. Or you can read David Ramseur’s engagingly personal book, which opens our eyes to the affinities and possibilities for cooperation between America and its neighbor at the top of the world.

In Melting the Ice Curtain, David Ramseur tells the fascinating story of US-Russian relations at the border where our two nations have been linked for centuries. He focuses on a rare opening that began during the Reagan-Gorbachev years, when Alaska Natives, artists and entrepreneurs moved faster than diplomats or politicians to bring the two peoples together. It's terrific story-telling about an era that has profound lessons for American policy today.

David Ramseur combines firsthand experience with thorough reporting to create an engaging account of a remarkable period of friendship between Russia’s Far East and Alaska. Intimate details abound in this contemporary history of arctic neighbors with so much in common, including environment, blood relations, political entanglements and intense curiosity about each other. Especially fascinating are the stories of dedicated citizen diplomats who helped reunite Native families separated by the Cold War, establish commercial and cultural ties, and crumble barriers between former enemies. This timely book reminds us that ordinary people of goodwill and determination can overcome suspicion and uncertainty to change the world, bit by bit, in even its most remote corners.

David Ramseur’s book recalls a more hopeful time when Russia was striving for democratic reforms, and when U.S.–Russia relations were defined by cooperation and goodwill. It is also a valuable reminder that nothing is predetermined, and that we should never cease to work for a better tomorrow.

Those of us who have lived in Alaska know the hulking presence Russia plays less than three miles away at the closet point. Journalist and political aide David Ramseur tells a compelling story of a colorful era when Alaska and Russia helped end the Cold War across the Bering Strait. The lessons Ramseur draws from these productive decades of northern good will are instructive for today’s uneasy relations between Washington and Moscow.

For nearly three decades, David Ramseur has been one of Alaska’s most persistent advocates for productive relations with Russia across the Bering Strait. Thanks to his tenacity in my Senate office, I eagerly stood up for human rights and against Russia’s escalating dictatorship. Ramseur’s fascinating account of this era is a must-read for anyone who cares about Russia or its former fur colony.

This compelling, well written account of a productive period in US-Russia relations is timely and invaluable. David Ramseur’s experience as a journalist makes him a keen and meticulous observer of a colorful but chaotic era. Melting the Ice Curtain dramatically shows how people of the Arctic have surmounted enormous obstacles to achieve high levels of cooperation, a model needed today.

—Vic Fischer, author To Russia With Love: An Alaskan’s Journey

For Alaskans who want to better understand their state's history, and for Americans who need to better understand the complicated US-Russia relationship, this book is an invaluable read. With the insight of an insider, Ramseur traces the highs and lows of Alaska-Russia interactions with lively stories about people and places on both sides of the Bering Strait. He rightly concludes the Arctic is the most promising area for future US-Russian cooperation and draws a roadmap for getting there.

The US and Russia need one another's help to tackle the problems that will matter beyond today's news cycle. Ramseur’s book outlines a blueprint for cooperation in the Arctic region, which is vital not only for managing the region's precious resources, but for addressing looming threats to national and global security.

For 40 years, Cold War politics banned Alaska and Russia indigenous peoples from practicing the sacred traditions they had pursued across the Bering Strait since time immemorial. With impeccable research, David Ramseur documents how these peoples pressured Moscow and Washington to reopen the border as they struggle to keep endangered cultures alive. Ice Curtain is must reading for anyone who cares about the ancient people of the Arctic.

We are now at another critical turning point in our history. Melting the Ice Curtain tells a compelling story of the success of grassroots citizen diplomacy and details lessons for today’s perilously poor relations between the world’s superpowers. Ramseur is one of Alaska’s experts on this topic and he offers valuable insights on how we may turn our challenges into opportunities.

This book’s distinguishing achievements include salvaging fading memories from earlier decades of improved relations across the Bering Strait and prescribing their reinstatement. Ramseur’s research exemplifies responsible journalism’s contributions to history. It is a pleasure to read. . . . A well-reasoned manifesto for international Arctic collaboration.

A fascinating study of the role played by Alaska and Alaskans in Soviet/Russian-US relations during and immediately after the Cold War.

David Ramseur is a visiting scholar in public policy at the University of Anchorage's Institute of Social and Economic Research. He served as press secretary, communications director, chief of staff, and foreign policy advisor to Alaska Governors Steve Cowper and Tony Knowles and to Anchorage mayor and US Senator Mark Begich. He has visited the Soviet Union and Russia more than a dozen times starting with the Alaska Airlines’ Friendship Flight in 1988.