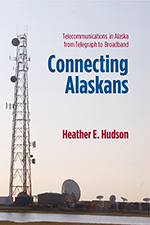 Telecommunications in Alaska from Telegraph to Broadband

“Alaska is now open to civilization.” With those six words in 1900 transmitted over a telegraph line installed on permafrost and through wilderness, America’s northernmost territory finally had a connection with the rest of the country. Yet, as hopeful as that message was, Alaska faced decades of infrastructure challenges as remote locations, extreme weather, and enormous distances all contributed to formidable conditions for establishing reliable telecommunications.

Connecting Alaskans tells the unique history of providing telephone, radio, television, and Internet services to remote communities scattered over more than more than six hundred thousand square miles. It is a history of a region where military needs often trumped civilian ones, where ham radios connected people without telephone lines, and where television programs aired days or even weeks later than in the rest of the country.

Heather Hudson covers more than a century of successes in technology and policy, as well as applications from telemedicine and distance education to egovernment and ecommerce, while clearly explaining the critical roles of Alaskans’ innovation, advocacy and persistence to connect their communities. Her comprehensive history and analysis of the impact of telecommunications in Alaska’s social and economic development is ideal for those interested in telecommunications technology and history, and in the role of communications in northern development; she also provides an important template for policymakers, planners, and developing countries struggling to extend their own twenty-first century infrastructure.

An exceedingly well-referenced history of telecommunications in Alaska, from the very first telegraph networks deployed in the 1860s to the broadband networks of the 21st century. The work is notable for the way in which it interweaves the descriptions of the extreme technical challenges faced in deploying a range of different communications technologies in physically extreme environments with the life-changing applications that those infrastructures have brought to rural Alaskans.

Century of Adventure in Northern Health - A