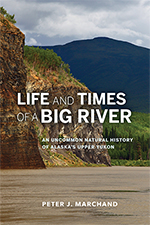 Life and Times of a Big River

When Richard Nixon signed the Alaska Native Claims Settlement Act in 1971, eighty million acres were flagged as possible national park land. Field expeditions were tasked with recording what was contained in these vast acres. Under this decree, five men were sent into the sprawling, roadless interior of Alaska, unsure of what they’d encounter and ultimately responsible for the fate of four thousand pristine acres.

Life and Times of a Big River follows Peter J. Marchand and his team of biologists as they set out to explore the land that would ultimately become the Yukon-Charley Rivers National Preserve. Their encounters with strange plants, rare insects, and little-known mammals bring to life a land once thought to be static and monotonous. And their struggles to navigate and adapt to an unforgiving environment capture the rigorous demands of remote field work. Weaving in and out of Marchand’s narrative is an account of the natural and cultural history of the area as it relates to the expedition and the region’s native peoples. Life and Times of a Big River chronicles the riveting, one-of-a-kind journey of uncertainty and discovery of a disparate (and at one point desperate) group of biologists.

Peter J. Marchand is a field biologist who studies forest, tundra, and desert landscapes. He is the author of Autumn: A Season of Change, Nature Guide to the Northern Forest, Life in the Cold and The Bare-toed Vaquero. He lives in Penrose, Colorado.

In 1975, Peter Marchand was a young biologist hired by the federal government as part of a team carrying out the first systematic biological inventory of the Yukon and Charley Rivers region of Interior Alaska. . . . He and his fellow researchers would discover much that summer, not just in their respective fields of study, but also about a fading way of life in one of the final outposts of the vanishing frontier, as well as a valuable lesson in survival.