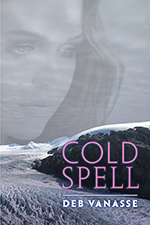 With precise and evocative prose, Cold Spell tells the story of a mother who risks everything to start over and a daughter whose longings threaten to undo them both.

From the moment Ruth Sanders rips a glossy photo of a glacier from a magazine, she believes her fate is intertwined with the ice. Her unsettling fascination bewilders her daughter, sixteen-year-old Sylvie, still shaken by her fatherÆs leaving. When Ruth uproots Sylvie and her sister from their small Midwestern town to follow her growing obsessionŚ and a manŚto Alaska, they soon find themselves entangled with an unfamiliar wilderness, a divided community, and one another. As passions cross and braid, the bond between mother and daughter threatens to erode from the pressures of icy compulsion and exposed secrets.

Inspired by her own experience arriving by bush plane to live on the Alaska tundra, Deb Vanasse vividly captures the reality of life in Alaska and the emotional impact of loving a remote and unforgiving land. Deb Vanasse is the author of more than a dozen books, most recently No Returns and Black Wolf of the Glacier, the latter also from University of Alaska Press. She is co-founder of the 49 Alaska Writing Center. She lives in Eagle River, Alaska.

Cold Spell will catch you in its icy grip as Vanasse deftly reveals the cracks and fissures of a frozen heart. A love story, a coming-of-age tale, and glimpse into a rarely seen slice of Alaska, the story reminds us that a life without dreams and without love might not be living at all.

Alaskan writer VanasseÆs novel captures the harsh beauty of the terrain as well as the strain of self-doubt and complicated family bonds.

Voiced alternately between daughter and mother, Cold Spell is a beautifully written work detailing what happens when life throws the two a curve, and how each deals with the aftermath. Author Deb Vanasse has called Alaska home for thirty-six years, and itÆs evident that she cares for her adopted land and its denizens very much.

Complicated family and community dynamics, death, teenage drama, and the pressures of living a subsistence lifestyle in a tiny isolated town add tension and depth. . . . [I]t certainly will give readers much to ponder.

Black Wolf of the Glacier