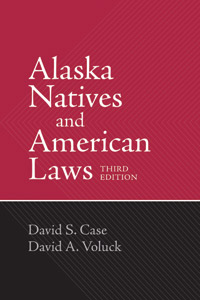 Now in its third edition, Alaska Natives and American Laws is still the only work of its kind, canvassing federal law and its history as applied to the indigenous peoples of Alaska. Covering 1867 through 2011, the authors offer lucid explanations of the often-tangled history of policy and law as applied to Alaska's first peoples. Divided conceptually into four broad themes of indigenous rights to land, subsistence, services, and sovereignty, the book offers a thorough and balanced analysis of the evolution of these rights in the forty-ninth state.

David S. Case represented Alaska Native tribal, corporate, and municipal legal interests for over thirty-six years, four of which he spent as an attorney for the Department of the Interior in the Office of the Alaska Regional Solicitor, concentrating on Alaska Native affairs.

David Avraham Voluck is a magistrate for the Central Council of Tlingit and Haida Indian Tribes of Alaska and a visiting professor of Indian law for Lewis & Clark Law School's Summer Indian Law Program.

For the lawyer and scholar fortunate enough to be involved in the complexities of the Alaska Native experience, this book is absolutely necessary.

Far from being a mere legal reference guide or hornbook, Alaska Natives and American Laws is essential reading for anyone in business, government, or civic life who is interested in contemporary Alaska. . . . David Case and David Voluck go well beyond summarizing and updating the latest statutes, regulations, and court decisions affecting Alaska Natives and their relationship with the federal government and the State of Alaska. The authors bring order and coherence to that uniquely Alaskan legal landscape that can be dauntingly complex, if not obscure, even to the most seasoned practitioners and policymakers.

Early Federal court cases involved land issues, because it was all about mineral rights, mining licenses, oil drilling licenses, and whether a tribal chief had the right to sell his peoples’ land. In later parts of the book it’s all about government services, one of which involved reindeer. . . . This is definitely an interesting book.

Fighting for the Forty-Ninth Star