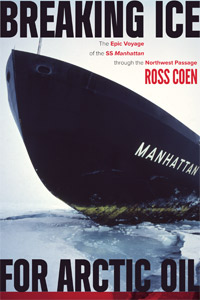 The Epic Voyage of the SS Manhattan Through the Northwest Passage

In 1969, an icebreaking tanker, the SS Manhattan, was commissioned by Humble Oil to transit the Northwest Passage in order to test the logistical and economic feasibility of an all-marine transportation system for Alaska North Slope crude oil. Proposed as an alternative to the Trans-Alaska Pipeline, the Manhattan made two voyages to the North American Arctic and collected volumes of scientific data on ice conditions and the behavior of ships in ice. The Manhattan ultimately demonstrated the impracticality of moving crude oil using icebreaking ships.

Breaking Ice for Arctic Oil details this historic voyage, establishing its significant impact on the future of marine traffic and resource development in the Arctic and setting the stage for the current oil crisis.

Ross Coen works at the Alaska Center for Energy and Power at the University of Alaska Fairbanks. He has published numerous articles on Alaska and arctic history in the Northern Review, Alaska Magazine, Alaska History, and other publications.

A great readŚwell organized, well written, and fully referencedŚproviding many lesser known details about SS Manhattan's history and the role it played in the Alaska pipeline debate.

For close to a thousand years, mankind has sent explorers north to find shorter sea routes between the continents. The resources of the Arctic are drawing shippers nowŚfor oil and gas, minerals and tourism. Ross Coen's thrilling account of the voyages of the SS Manhattanforetell today's challenges and opportunities.

As the discussion of marine travel in the Arctic continues to ramp up, the release of Fairbanks' author Ross Coen's newest book couldn't be timelier.

CoenÆs story shines as he describes the incredible natural barriers that literally held the huge ship back and the determination of her crew to get her to Prudhoe Bay.

Breaking Ice for Arctic Oil is an informŁative, accessible, and enjoyable read. Those interested in Arctic and Alaskan histories will undoubtedly find much to enjoy in CoenÆs detailed and personable narrative, while scholars of northern and transportation histories will recogŁnize important linkages to contemporary northern affairs.

In æBreaking Ice for Arctic Oil,Æ Fairbanks-based historian Ross Coen recounts the voyage of the Manhattan and places it in the larger context of the heady early days of AlaskaÆs entry into the world oil market. The result is a fascinating look at what happens when politics, big business, and technology dovetail to accomplish what has never been done before.

Globalization and the Circumpolar North