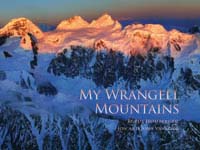 High atop cascading waterfalls and deep within the lush green depths of the valleys, Swiss photographer Ruedi Homberger has for more than twenty years captured in photographs the majestic beauty of eastern Alaska’s Wrangell Mountains. In addition to summiting some of the Wrangells’ loftiest peaks, Homberger has in recent years incorporated a technically challenging new approach into his work. Flying above the mountains in a small plane, Homberger literally goes to new heights to reveal a series of stunning aerial views. The first book-length collection of photographs focusing exclusively on the Wrangell-Saint Elias National Park and Preserve, My Wrangell Mountains offers readers a rare opportunity to “stand among the giants.” included in this magnificent oversized volume are over three hundred full-color photographs and an accompanying selection of sketches by award-winning illustrator Jon Van Zyle.

Born in Switzerland, Ruedi Homberger is a climber and photographer who has spent his life exploring new horizons. Jon Van Zyle is an artist whose illustrations appear in many children’s books, including A Woolly Mammoth Journey and Raven and River. Jona Van Zyle is a writer, painter, and curator whose work has appeared in Mushing Magazine.

Homberger has spent considerable time during the past two decades climbing up, skiing down and flying over the rugged peaks that sprawl out from the southeastern corner of mainland Alaska and onward into Canada. Along the way, he’s taken countless pictures, and the ones that have been gathered in this beautifully produced volume will immediately convey to readers what draws him repeatedly into these wild lands.

A wonderful book (and gift idea) that will satisfy pilots, climbers, photographers and those who love the mountains of Alaska. My Wrangell Mountains by Swiss photographer Ruedi Homberger and Alaska artists Jon and Jona Van Zyle will take your breath away with spectacular vistas of a frequently overlooked range of Alaska mountains, glaciers and rivers.

Aleutian Islands of Alaska - The