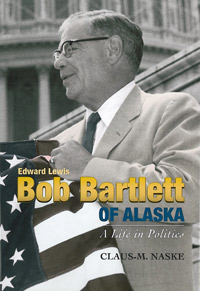 A Life in Politics

Claus-M. Naske has written the first biography of the man who helped to make Alaska the forty-ninth state and who served as one of Alaska's first senators. More than a regional political history, the story of Bob Bartlett involves his opposition to U.S. involvement in Vietnam and his early warnings about the dangers posed by radiation.

"Finally, a book about one of the finest persons who ever served Alaska. And a fine book, too. Claus-M. Naske, the author, is to be commended for assembling this important piece of Alaska history. It was not an easy assignment." Seattle Times Magazine

"In Claus Naske's biography, the first ever written, the author explains how this unusual man, who was reluctantly dragged into politics, became such an extraordinary success. Based on his research in the Bartlett papers at [the University of Alaska], and long interviews with many of Bartlett's friends and his widow Vide Bartlett, he has written a colorful account of the senator's life." Seattle Post-Intelligencer

"Readable is the key word. The book bounces along, spicing the essential facts and figures with poignant glimpses of Barlett's personal life." Anchorage Times

"An absolutely superior job of portraying both the greatness and the essential humanness of the man who, once statehood was obtained in 1959, was elected to be the senior U.S. Senator from the new state. Bartlett come across in the pages of Naske's book just as he came across in real life as a tireless, dedicated, people-oriented statesman who gave his life for the people of the territory and the state he loved so well." Alaskafest

Claus-M. Naske is professor emeritus of history at the University of Alaska Fairbanks.