(Note: we have also posted a video montage of the two expeditions.) 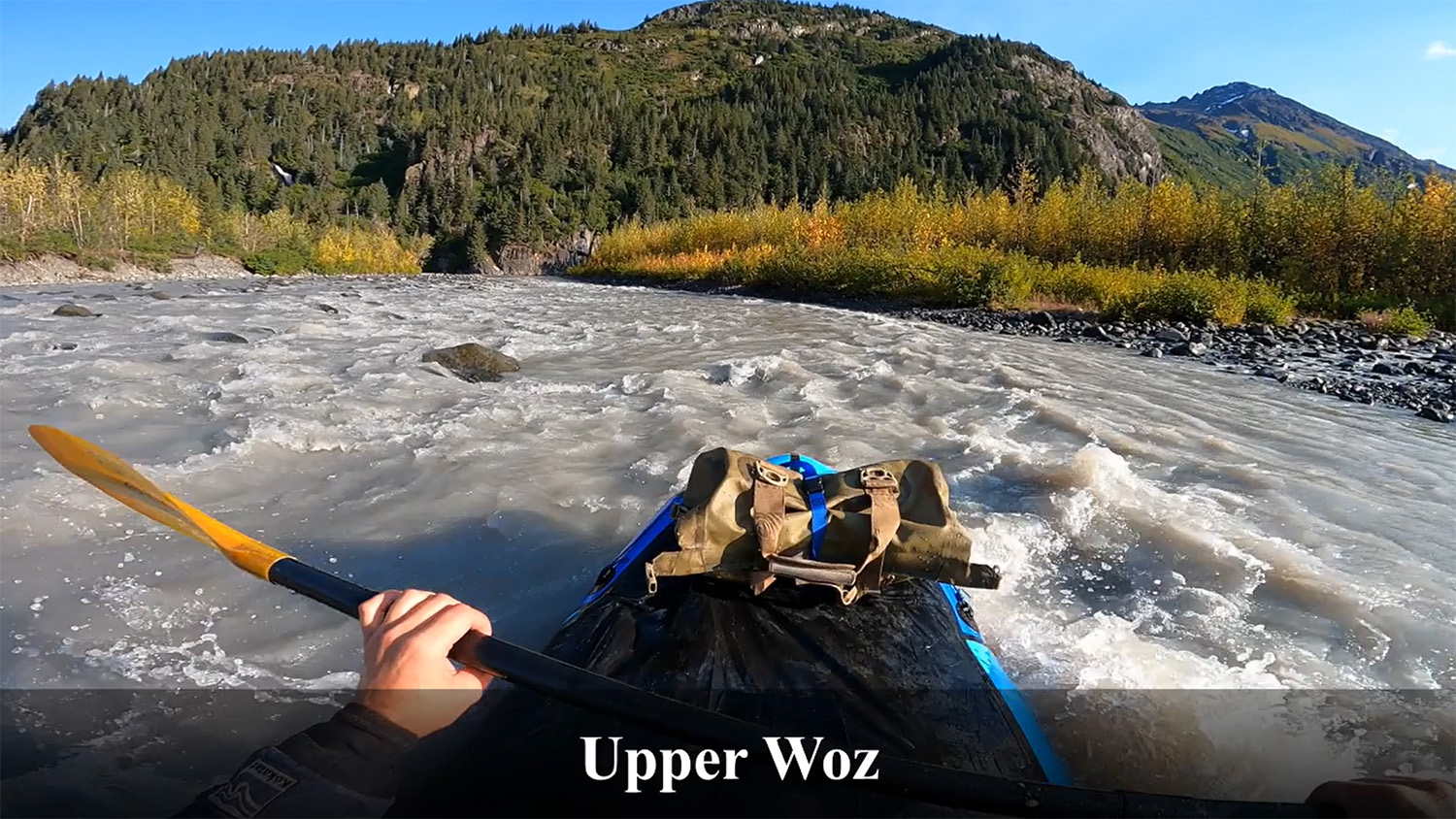 During the 2021 field season, myself and other members of the Coastal Margins Kachemak Bay Stream Team participated in two packraft float trips down the Wosnesenski River (“the Woz”), located in Kachemak Bay State Park across from Homer. The purpose of both trips, which were funded by an EPSCoR student research seed grant, was to gather water samples along the length of the river.

For each trip, myself and a fellow researcher flew from Homer to the proglacial lake at the headwaters of the Woz, then gathered water samples all the way from the headwaters to the ocean. For the first trip, which took place in June, I was accompanied by McKinley Wallace, our lab and field tech. I was accompanied by recent University of Massachusetts Amherst MS graduate Aeon Russo for the second trip, which took place in September. Both McKinley and Aeon have extensive experience floating rivers, however, I am a novice rafter and relied heavily on their experience.

In addition to sampling the main stem of the river, we sampled its three main tributaries. The Woz is roughly 20 km long and each trip took us 6-7 hours to complete. Along the way we collected nine total water samples, six in the main stem of the Woz and one sample from each of the three tributaries. We then analyzed all of the water samples for concentrations of trace metals in both the dissolved and the suspended load. The main goal of this sampling was to characterize the trace metal concentration and flux along the length of the Woz, which helps us to study the degree to which receding glacier coverage within the Woz watershed and throughout the Gulf of Alaska may be altering the fluxes of trace metals to ocean. Glaciers have stored atmospheric inputs of trace metals, which are now being released as glaciers recede. Glacial recession is also exposing mineralized bedrock once shielded from the atmosphere enhancing the release of solutes and trace metals. Some of these metals, such as iron, are important nutrients for primary producers, while other metals like chromium and nickel may be harmful to the primary producers. 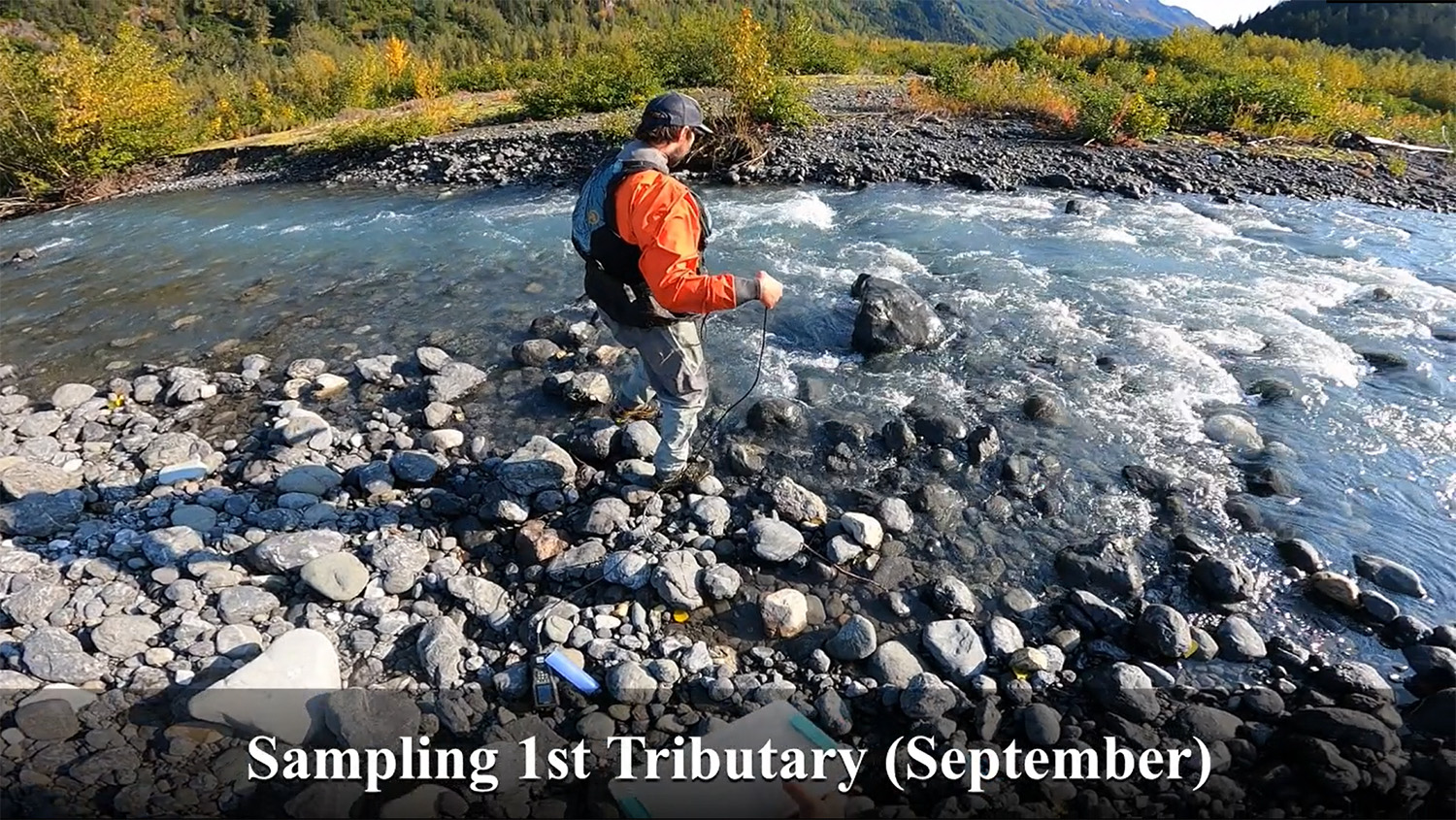 The Stream Team normally samples the Woz every month from March to October at a location near its outlet to Kachemak Bay. By supplementing this with longitudinal (headwaters to ocean) sampling efforts, we can better understand watershed processes that control the generation of dissolved and suspended loads of trace metals. We selected sampling times in June and September to attempt to identify different seasonal sources of trace metals: in June the streams in the Woz watershed are primarily fed by snow and ice melt, while in September the streams are fed by a combination of ice melt, stored water, and variable amounts of precipitation. We hope to show how different sources of water contribute to the flux of trace metals and to better anticipate how fluxes of these trace metals may change in the future.

We had incredible weather for each trip and we all enjoyed the perspective of experiencing and viewing the upper portions of the Woz. Floating and sampling the river and its tributaries provided helpful context for our research. Each tributary of the Woz has different characteristics and being able to see and sample those was special. The Woz river water and streambed morphology changes drastically from the headwaters down the ocean, and these changes cannot be appreciated fully from satellite imagery or from our normal sampling site. I am grateful for the seed grant for the opportunity it afforded our team to conduct these trips.